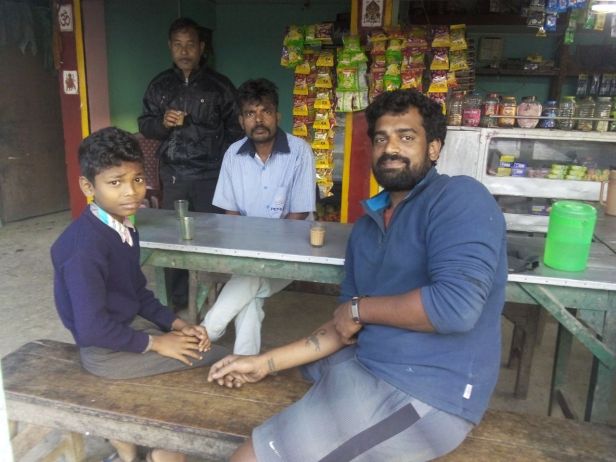 A few months ago i decided to take a month of work and cycle to Bhutan from Kolkata. A chunk of my trip would be a a ride through West Bengal. This was during the tie modme when the Government has banned 500’s and 1000’s.

Armed with a little money, a couple of hundred US Dollars and an ATM Card which during this time was hard to use i landed in Kolkata. After staying with a friend in Kolkata and setting up the bicycle i was on my way. Passed the majestic Howrah bridge and got on to the National highway. This time around i decided not to use the highway roads but try and use smaller roads that run almost parallel to the highway.

After a few days of riding i entered the tea belt of West Bengal. For kms ahead all  could see for tea estates on either sides. These Estates usually are in the middle of nowhere and have about 2000 people working in them. To service the estate workers a few shops have been setup around the estate. The highway runs through the estate. I happened to reach one of these small towns just before nightfall and found a school i could stay the night. I was sitting at a store charging my phone and as usual a bunch of people came to see who had come to their town. Had a very basic conversation with them and went to the school to make chai and setup my camp for the night.

20 mins after i had just about settled down i met Suraj who came to invite me home for dinner. Since i was hungry, i went to his house in the outskirts of the estate. During dinner we started to talk and he tells me that he drives a truck and his wife works in the Tea estate as a picker. What he told me next was troublesome. The tea estate pays his wife 140 Rs. a day for 8 hours of work. They go to work at 6 am and back by about 4 pm. They do this 6 days a week with Sunday being the only holiday. I asked him if the government helps with food etc., apparently the governement is supposed to give them food grains for 1 Rs. but charge 8 Rs. because they can. The center gives out the grains for free but the state government instead of distributing it for free charge BPL families. Idiots.

Imagine with 140Rs a day, they feed a family of 5 (Suraj’s Dad stay with them and they have 2 kids),pay for school, electricity, alcohol etc. The minimum wage in other parts of the country are around 300 Rs but sees like West bengal needs to catch up. I almost forgot, for dinner i was served a speciality called Ellise fish ( this fish is transported from Bangladesh) , one kg of this fish costs about 500 rs. All of this is happening when nobody in town has any money due to the demonitisation drive. Workers had not been paid for a few days and they dint have enough to buy food grains. No paytm , no cards, none of that works

Imagine during a time like this people invite someone like me who hasn’t shaved, wears clothes that are dirty home for dinner. I guess the poor are the ones who actually give. The rich are snobs. I am a snob too even though i have no money They gave freely without expecting a thing. They called me a few times during my ride to check if i was ok. I call this unconditional love for which i will be forever grateful.

As i finish writing this blog post i am calling Suraj to tell him that this is was best experience i have had during my ride.  Today i already spent about Rs. 200 buying fruit and beedis just for me and somewhere people like Suraj are saving money to be generous when a visitor comes to town.

Looking back at all the experiences i have had during my rides across the country, i am grateful for people like Suraj who look beyond my appearance and go out of their way to help.