A couple of years ago i wanted to run the Wipro Chennai marathon. Since i wasn’t really sure i could run a full marathon just yet i decided maybe the half marathon would do. Now the run was in December and i could get a couple of days off but the only problem i had was that i had run a half at another run and few other half marathons before that. I wasn’t really keen to run a half marathon after i travel all the way to Chennai from Bangalore. It just wasn’t exciting enough. I wanted a little more. What’s the point of doing the same thing over and over again.

I decided this time around I would ride my bicycle to Chennai and run. Seemed ok. As usual mum gave me a spitting for thinking about it. Told a couple of friends about the plan. Made a few calls to get myself registered for the race. As usual Ashwin’s place is always ready for me to crash at, so that was sorted. The plan was set. I was to leave Bangalore at about 4 am in the morning so that i would reach Chennai at about 4 am the next day. Packed up a tube, a pair of shorts and my running shoes. This time i decided that i dint need a jacket, sleeping bag or a tent. I mean i was going to ride through the night and get to Chennai as early as possible so that i could get some rest, go out in the evening and be rested enough to run the next day.

As all my plans i woke up and got lazy. Finally i left home at 11 am. I mean i knew even at 11 am i would get to Chennai at about 2 so that was ok. What i didn’t account for was traffic on the street and how that effects my riding. From the moment i left home and got onto Hosur road, the traffic was insane. Thankfully it dies down the moment you get past Electronics City. The bigger problem is really fast moving trucks and cars. that follow no lane discipline till they get out of the city. As usual put a cup of tea at the Karnataka Tea stall which serves some really awful tea. Its more a tradition, i have been stopping at that particular tea shop for years now. Anyways finally got past the toll. Cyclists and motorcyclists don’t have to stay in line to get in, you just get in. Quickly got past the toll area, this is one place where people like to switch lanes etc since there are a bunch of shops where you can buy something. I rode past for another 30 km till i hit this area with a really small hotel in the middle of nowhere. I quickly stopped for lunch. The good thing about Tamilnadu is that good food is all around. Meals are a way of life. Anyways after lunch continued to ride for an hour before stoping for chai. The traffic got much better, trucks stuck to their lane but cars were still assholes. Anyways somewhere near Ambur i was trying to ride faster, i looked up and almost in front of me on the wrong side of the road was a bullock cart. Usually when things like this happen i quickly cut across the road but this time i almost rode into a ditch trying to avoid the cart. No point yelling at the old man riding the cart so kept riding.  As it got darker and there were lots more vehicles on the street. Trucks belted past and villagers on bicycles darting across the road. Dinner was peaceful. Stopped somewhere after Ambur. Took off the moment i finished. Didn’t want to hang around drinking chai. That was for later at night.

As i rode through the night i kept getting sleepy. It was time to catch a nap. Found a chai shop on the opposite side of the road which had a bench in front of the store. Put a chai and a smoke and caught a nap. A hour later a truck driver woke me up. He wanted to sit and decided the chair was not going to help. So he woke me up and asked me to move. Thank God i didn’t spit on his face for that. Quickly washed up and put another chai and got on my way. Rode enough to get to Sree Perambatur by 7 in the morning. Now i had only 60 km to go. The last 60 km took me longer than ever. Slowly made tracks till lunch or atleast early lunch at this really nice biryani place. Ate up and rode as quickly as i can to reach the world trade center where the expo was happening.

Chilled with Ashwin and Raj for a little while and headed to Ashwin’s place. A quick shower and off to put some food outside. All my plans of partying at night was off, i needed to sleep so that i could run. Raj and Ashwin were volunteering the next day while i ran. The run was pretty decent. It was really hot but thats how Chennai has been always. Made decent time, didn’t really feel the stress of cycling the previous night. At the end it felt good. 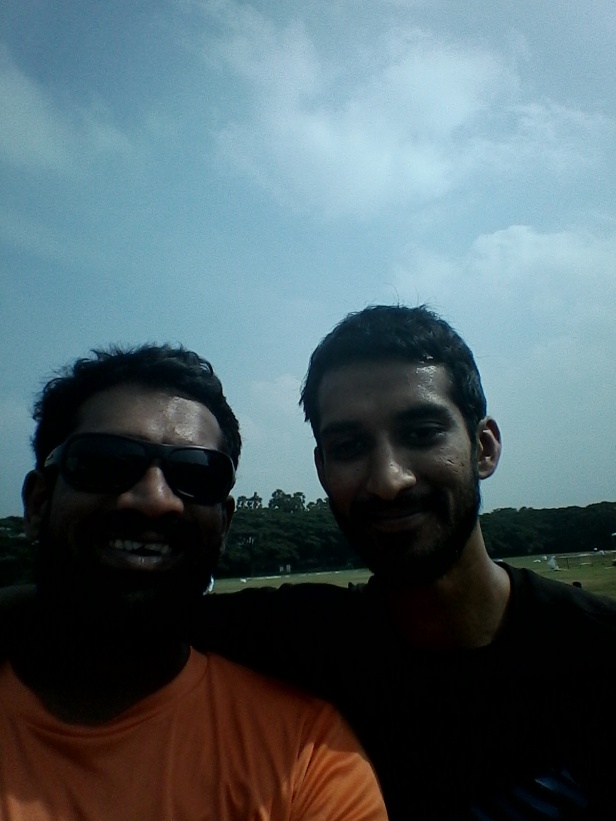 Back at Ashwin’s place , had a shower and got dressed to go and catch a bus. Found a bus that left from close by and managed to grab the last seat. I have no idea when the bus got to Bangalore. I had passed out. The driver woke me up and i rode back home. The bike surprisingly was in one piece even though i had not packaged in. Thankfully didn’t need to put it together, just pulled it out of the boot and rode home.

Back home and mum ofcourse yelled at me for coming back late. She thought i had come in the morning and been out the whole day. Some things never change. Overall i am glad i did that ride. it felt good. Now i know why i will never ride a brevet. I hate going out without my sleeping bag and tent. The ride was stressful like none before. I normally would take 3 days for a ride like this not 25 hours. I prefer touring rather than brevets. This was a good way to find out.