The last few years there has been a rampant number of pubs and micro breweries that have opened up across India.  Even though i don’t drink i have been to a bunch of them. Every time i travel to another city i usually go to a pub to take chill. The food is invariably better or maybe i just like bar food. Unlike the old days where bar food meant pakoras, oily chips fried in diesel or even pickle these days there is a huge variety of choices. I mean where else do you get a combination of nachos and rock music except for a bar. Like everyone i have a bunch of places i regularly go too. Usually its because its close to home or close to the place i am staying at when i travel.

Went to this really nice place in Delhi with a friend and ordered. This was my first time there and looked promising. It looked like a place where i could go in for a bite to eat every time i get to town. Anyways we ordered and started to talk. A little while later she went to the loo and came a little flustered. Since i didn’t really know why i let it be. A little later i went to the loo and walked into the women’s loo by accident. I thought i understood the painting on the door correctly but apparently not. I came back and told about what just happened, she had done the same too. Anyways as soon as the food arrived this was forgotten. Went back to the same place a few days later and again walked into the wrong loo. 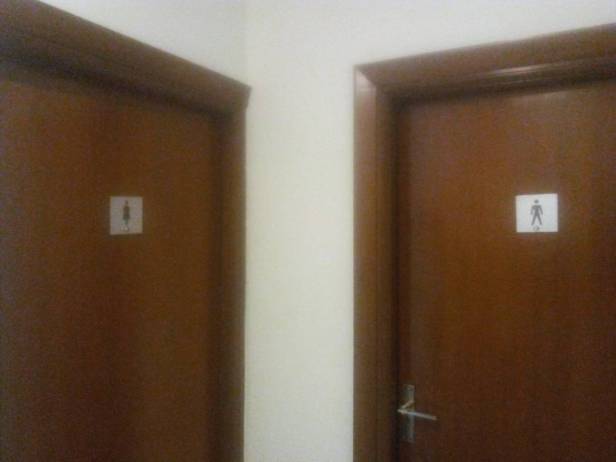 Back in Bangalore and went out with a bunch of friends. Again went to the loo and almost walked into the wrong one. This time there was something like a morse code and they expected people to decode that to go to the loo. This was a piss off. Not that it was embarrassing but it was the hassle it caused. See when you want to pee, you want to pee. You don’t want to solve a mathematical equation or think about anything  but just find the nearest tree or a loo, whichever is closer. A few days later the same fucking thing happened. This time it had an image of a king and the other was not of a queen but someone without a crown. How would i know which one to go too. Imagine piss drunk wanting to got to the loo. There is no way he can go to the right one. I think he would take a wild guess before running in, hopefully into the correct one. Rascals expect you to be a part of Mensa to drink in their bar.

In the past when you went to a bar to drink, you had these really nice dark corners where you and your girl could getting handsy. These days not only have designers changed furniture to whose with bright colors , added more lights to spot handsies they have also changed the way signage is displayed. What ever happened to the signage on the door that read “Men” or “Women”. No No No even when people are sober they have trouble understanding these and you expect them to understand them to when they are drunk. Either somebody decided that it was supercool to fuck with people when they wanted to pee or just wanted us to get a little more intelligent. Also this is just not only me. I have asked around and lots of guys have these problems. A friend and I spent a little time even discussing this. Imagining not checking the girl on the next table out but talking about this, that’s how important it was. Maybe this is a new use for Modern Art.

Thank God the designers were not asked before we shaped cups to serve alcohol in, oops too late no wonder cups / glasses are weirdly shaped these days. Thats a rant for another day.  The only thing i can be grateful for is Fire Exits are still called fire exits. You don’t have to be in Mensa to understand that and hopefully it will stay that way.