Its been a while since i have stayed put somewhere. Usually when i travel i am usually stay at  a place maybe for a day if not less. This time around since the race would start on a saturday i had to stay in Astoria for a little while.

Thats Steve on the right and Brad at the back

Warmshowers helped connecting to Steve who moved from California to Astoria. He ha this really beautiful house in the town and hosted us. Over the next few days we would get to walk around and generally set ourselves up to start this ride. The town of Astoria has maybe 10000 people if not less. Being on the Columbia river seems to attract a bunch of people to the town. It was one of the places Lewis and Clark visited. The Lewis and Clark trail and the Trans am ride starts from here.  I spent a few days a walking around and talking to people in town. They have a bike shop and this is season for them. The bike shops sees every racer swing by to either setup the bike or to make last minute purchases. Thankfully they are prepared and normally fully stocked up. Bunch of riders had told me about getting a mirror. Apparently to ride in the US you need a mirror . its safer. So i got one. The very last one. The town has this really nice vibe to it. They have tons of churches and are liberal at the same time. i saw a bunch of pride flags on few houses. Turns out both can co exist. 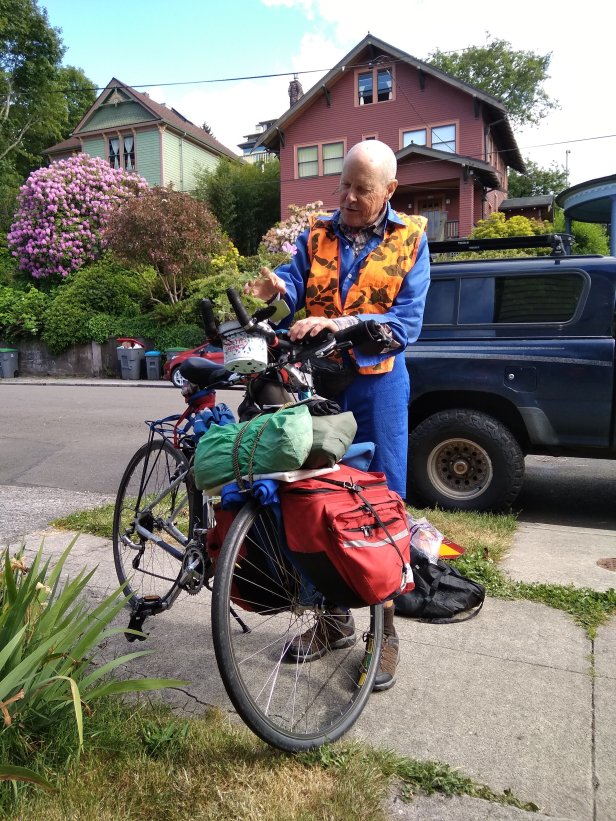 Roger and his lovely plant

On the final day at Astoria i met a bunch of riders some were part of the race and the other were on a bike tour. A german couple were on a tour with their baby. The bike had a baby on board signage. Roger who is from Arizona found a potted plant on the side of the road and adopted that. He even found a spot on the bike to place it. 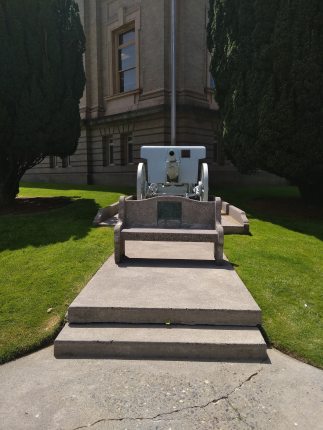 The most valuable advise i got was from Rolf who was from England. While sitting outside and chilling at the coop with Don, Rolf and Tim came by. We chatted about a few things and one thing that Rolf said stuck, ” the cheapest way to get to home is through Yorktown”. Its brilliant how riders in spite of how fast or slow they are look after everyone. Brad who i was staying with in Steve’s house had ridden the route before. He helped with maps and advise. Super nice guy to spend time talking to me about everything he had seen in the past. He was pushing to finish the race in 18 days. To him the race wasn’t about who would win but just to prove to himself he could ride 4200 miles in that time. With a bright pink cap and socks he was ready. Any other day if i wore a pink cap or socks it would look strange but to other racers its super normal. Brad’s theory was you were never too visible. Rather be extra bright and help cars see you.

Brad and his pink socks

At the racer briefing met a bunch of riders form other parts of the world. Its amazing to see so many people from different walks of life taking time off to ride. I think only about 5% of the racers would think that they could win it, for everyone else the race wasn’t against someone else . Saw my first velo mobile. Looks superb. Seems tempting to ride. Maybe i could get one someday.

My first velo. Dave was telling us he needs a parachute to stop

Packed up my bags and had everything set on the bike. Tommorow at 6 am we go. Thankfully if i dont wake up one of these guys ( see image below) should wake me up. For now trusting Alarmy. 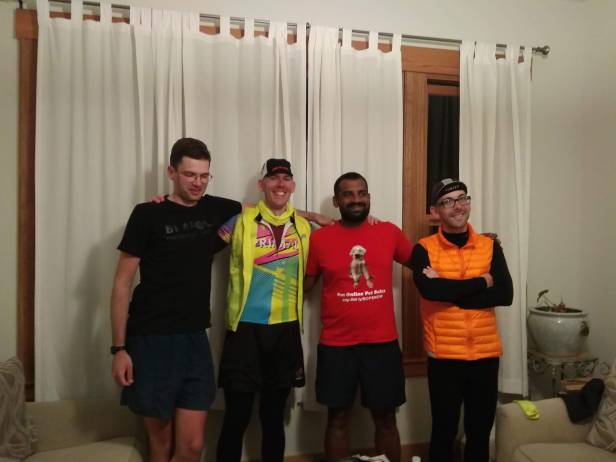 From L to R: Bowlek, Brad, Me and Chad