Spent the first week in the US trying to learn to ride on the right side of the road. Alan picked me up at the airport saving me the trouble to having to setup the bike at the airport. Setup the bike at his workshop. Alan and his wife were super nice. The room they had for me was lovely. Spent the first day riding Alan’s bike around Queen Anne trying to get a sim card. Strange riding on the right side of the road. Walked around their community and saw the famous Frazier view of Seattle. The space needle even though under construction looked really nice. Apparently there is a restaurant on the top of the space needle. Setup the bike at night. Alan loved setting up bikes and he helped me setup mine.

Setting up the bike at Alan’s Workshop

On my first full day inSeattle Alan was kind enough to show me around. We found the AT&T store to pick up a sim card and then rode around town to pick up spares. My bike needed a new tyre and i wanted a pair of shoes. Paragon chappals wont cut it on this ride. Went to the music festival at night. Decided i would dedicate the next morning to fixing up the bike. 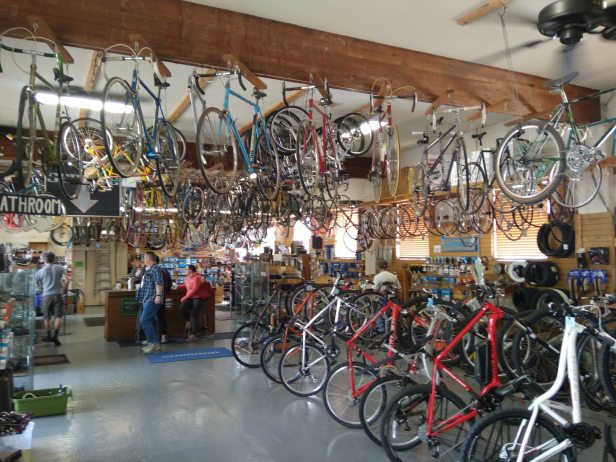 Thanks to the guys running bike shops back home. The experience has been identical

Woke up early in the morning. Alan helped me wash up the bike. Its amazing how simple it is here. At home with the dogs running around there is no ay i could just wash the bike. There would be greece everywhere. With the bike washed and with new Bar tapes put it was ready. Noticed a cut on the front tyre and figured i would need to get another one which i could find the next day. Went to the music festival with Alan and Peggy.  Went to my first Sing along and a Bharatanatyam show. Nice to see that lots of people actually took the time to come down to see this.

Alan helping me clean up the bike before the big ride

The third day met with Bowlek another rider who was in Seattle. We had decided to ride to Astoria together. Went back to the Dog in the Park for some hot dogs and then the bike shop for a new tyre . Picked up supplies to cook an Indian meal. Met with Alan’s son who came back from China. Super nice talking to him. He was back home for the summer and was going to intern at the Attorney general’s office. Thanks to the sambar powder that i brought for Peggy making dinner was simpler than back home. With my extremely limited cooking skills and Cathy’s instructions (woke her up and irritated her to ensure that the sambar would be editable) everyone seemed to like the meal. Bowlek and i decided to meet at Bremerton. I would take the ferry close to Alan’s place and he would from the ferry stop where he stayed. Packed up my gear and by the time i was done it was 11 pm. Wasn’t able to meet Priyank at night since i had to get up super early in the morning.

Just before we caught the ferry

Alan rode with me early morning to the ferry stop. Was really hard to leave. Now i was on my own. Caught the ferry and met another cyclist who was on his way to morning ride. Met Bowlek at the gas stations. Quick breakfast and we were off. Super nice road across the countryside. Excellent views. Our first glimpses of rural America seem pleasant. We had lunch at the store in the middle of nowhere. The sandwiches which were 600 calories each were disgusting. I just realised i rather eat stuff that was better for me than count calories. Bowlek had figured out where to stay the night. Camp grounds seem to be plentiful. Reached the town of Monasanto. Nobody in town. Looked like one of the hollywood sets. That seems usual when its 8 in the evening. The campground host wasn’t available so we snuck in and pitched the tent in an open space. Bowlek was a little jumpy. I think the media stories about every American having guns has caused that. He would ensure that we stuck in line and not do stupid shit. He’s was trying to keep me safe. Me on the other hand decided this was like home and pretty much was doing the stuff i did while touring back home.  I think we rode about 200 kms on the first day. It has started to get colder. 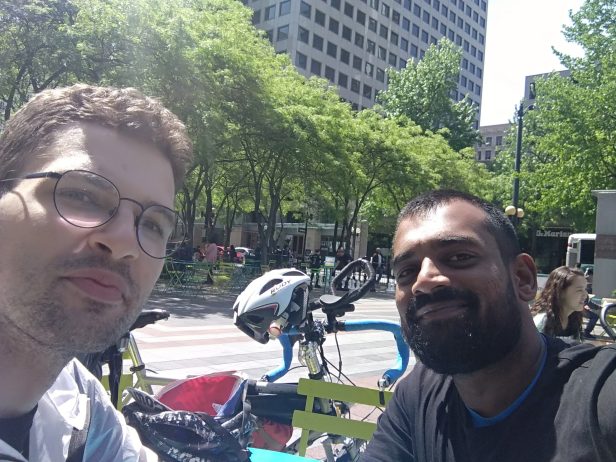 PC: Bowlek . We took a bunch of pics close to the water.

Next morning we woke up reasonably early and packed up our gear. Went to the town looking for a store to get coffee and breakfast. A nice lady stopped by to say hello and gave us postcards of Monasanto. Apparently its the county seat which means any they have all the government offices there. It always helps to understand the economy of small towns. Started to ride and finally reached the Astoria bridge. Thanks to Steve we had a place to stay that night. Reached his place and put away the bikes and quickly had a shower. Lovely little town. Walked around and ended up at Mcdonald’s for dinner.

More on Astoria on the next blog. 4 days to race day.