Started my day by drying my tent and sleeping bag in the sun. Thankfully the restroom in the park had a hand dryer that i could use to dry my shoes. Even though the sun was out it was still a little chilly. We packed up our bags and went to a gas station to get coffee and a little breakfast. I am slowly getting used to the food being served here. Would prefer something else for breakfast but that needs some intense research. Started riding towards the town of Redmond. Micheal and George were ahead of us. We reached the town and went to the Mcdonalds to get some for and coffee. While sitting out on the lawn

Don met a cyclist that he had bumped into earlier. Jake was riding from Eugene to Ohio. This was his plan for the summer before he went back to teach in school. Jake’s family were farmers. Interesting to see how different it is here than back home. They owned 3000 acres and everything including plowing the field and harvesting were done by 4 of them. In India if you had 3000 acres you would have about 100 people atleast working on the farm. Everything including the tractors are automated. According to Jake all he had to do was feed in the gps coordinates on the tractor and sit back and read a book while the tractor did the job. Someone sat in the tractor just incase there was a glitch and the tractor ran into the road or something. They grew wheat and Corn. Also during the less busy times they worked on the chicken farm.  No matter where anyone was everyone came back home during Harvest to help. So Jake would have to teach in school and come back and work on the farm for another 8 hours during harvest even though he dint live at home. As we were talking the damm sprinkler came on. Looks like Don complaining of not being able to have a shower may be causing this. We got a little wet again. Jake decided to ride with us till Mitchell. Don had found a hostel for us to stay at on warm showers so we were committed to go there. 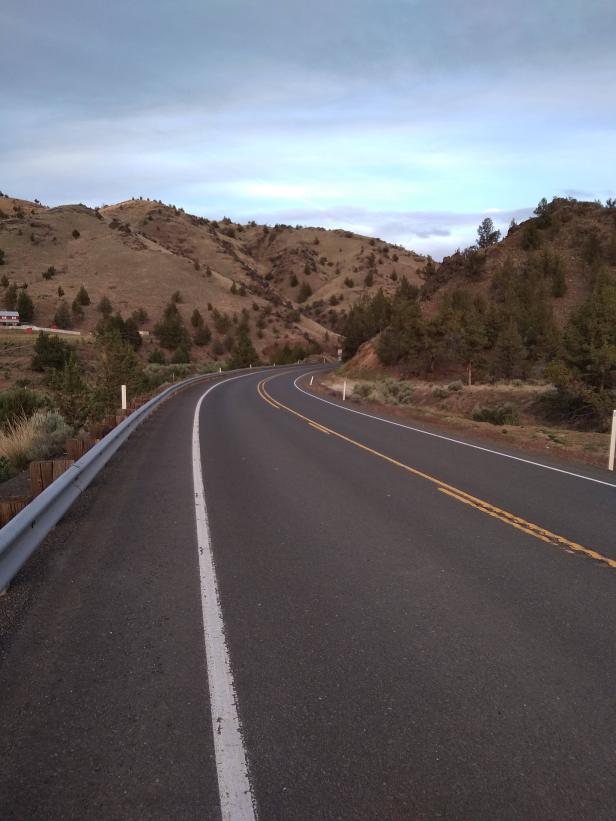 As we rode towards Prineville we hit this super nice downhill. The road took us down into the valley. There were these 2 large buildings on the side of the road. Found out later that Apple had a data center there. The town had given them the land for free in return for Apple to setup data center and employ some people. Turns out 4 people worked there. Not too much has come from giving away free land. A few days ago i heard about a racer who hit the corner of the bike path and got hurt. He was going downhill rather quickly and had not seen the cement corner He had a broken rib and a bunch of bruises. It had caused him to go back home. Passed on the info to Don and Jake. We descended slowly. Another racer had posted about how a deer came out in front of him while he was descending and he crashed into it. He was able to take a day off and then start again after which no news. Got off the aero bars while descending and put a couple of fingers on the break in case i had to break. Its like back home. I always unclip in traffic and keep my hand on the brake just incase someone or something comes in my way. Apparently here people don’t expect anyone to run in front of them so they don’t really bother with keeping on foot on the brake. Quick lunch at the Dairy queen. Tried the meal and Ice cream. Nothing amazing about the ice cream. i don’t know why there is such a big fuss about it. 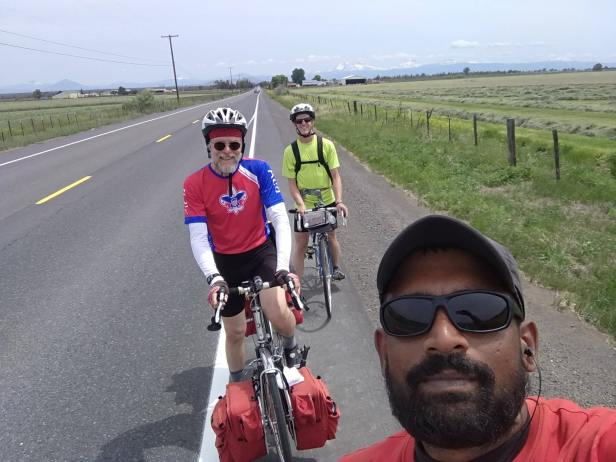 Jake, Don and Me after our Prineville stop

Started our ride and headed towards Mitchell. No services between here and Mitchell. Stocked up on supplies just in case before we left. When we say no supplies it means no coffee too. Thats hard. Kept riding and stopped a couple of times through the entire time to take a break. A quick smoke break and off again. Climbed to the top of Ochoco pass. I thought i was a hunter lurking in the bushes. The hunter dint say hello or anything. Was wearing camo hat and was super still. Turns out it was George who was setting up camp for the night. He wanted some ME time and decided not to say hello.  Finally we reached the town of Mitchell. Don and Jake were faster and gotten to the ton a little earlier. While i was cycling into the town I could hear this loud cheering. As i got closer to the cheering turns out the wonderful folks at the Spoken4 hostel were out cheering for me. Thy had a water counter setup for racers, beds inside ready for us to sleep, a kitchen with amazing food and a shower waiting for anyone who wanted to use it. Its hard to imagine a place like this existing in a town of a 100 people. To add to it all Pat to ran the hostel told me about a contribution made by a previous guest for the next person who came. This meant that i dint have to worry about paying them. As i went inside to see the place it was beautiful. Bunk beds with clean sheets and a bed with my name on it was ready. Went downstairs to the kitchen and discovered that my meal was ready. A plate of meat and beans. Quickly ate while talking to them. Decided to have a quick shower when i heard that LE was on his way. Went out to greet him like i was greeted before. He came in and was debating on if he could go on a little further for the night. Finally he decided just to stay.

Super weird tree in the middle of nowhere. Got a pic of this while waiting for Don while he was dropping off a Elance broacher at a church

I was super curious to find out why there was a hostel in the middle of nowhere. The hostel used to be only a church and one day while Jalet and Patrick where at Mitchell, Jalet had a vision that there should be a hostel there. The church building belonged to their church back home and they got permission to convert it to a hostel. So now on Sundays the kitchen doubles up as a church. They take people on tours around the painted hills when they have a bunch of guests. Someone donated a school bus and they use that to ferry tourists around. As we talked LE offered to help with any tech requirement they had. Turns out they needed a system to ensure that all the grants they were eligible for could be tracked and they could keep in an eye out on the progress of each of them. He offered to build that for them.  As we talked it got super late. It was almost 2 am. Its nice to go to a church that doesn’t really care which religion you belong too. According to Don the ministry focuses on hospitality and everything that happens is done using that lens. That was new. Who knew churches had different types of ministries focusing on different things. 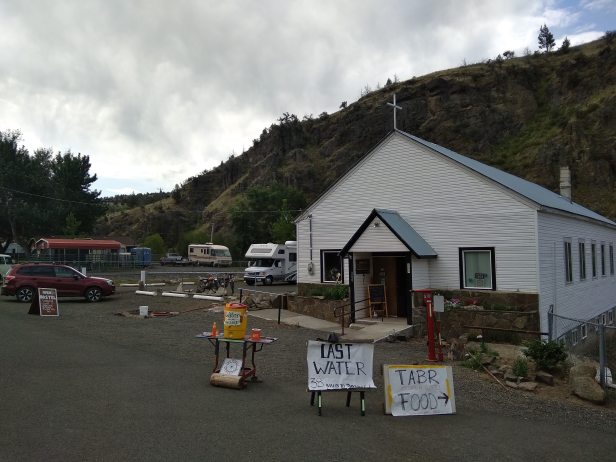 I was telling Pat and Jalet that the hardest thing has been to remember that when i fall off the bike or get down to get off on the right side. Since we drive on the left side of the road in India its instinct to get off on  the left to get away from traffic. A few mins later i went upstairs and i saw this small note on my bike. It read ” Fall –>”. I hadn’t noticed Pat slowly sneak away while we talk to make the sign.

Our Setup for the night at Spoke’n hostel

By the time we finished talking it was about 2 am. Time to hit the bed. I quickly opened up my tent and sleeping bag and put it up to dry outside. The desert air would get to dry super quick. Hopefully i would get another glimpse of the painted hills. The bed was perfect. With screens for added privacy and lovely linens for blankets i passed out.

This is the greeting I got at the Spoke’n Hostel

Lesson for the day : Dont worry about money , there are enough wonderful and kind people in the world who take care of you without you even asking for it.

Up next : Day 6, Mitchell to Dayville (Still in Oregon)