After a nice warm night inside the fellowship hall in the church we woke up a little later than usual. As we packed up our bags we had a visitor. The community hall is used for multiple things and they were planning something for the town. As i kept talking to them they started to open up. The young people in town have left to go to other places where they can find work. The folks in town are usually retired and have come back after working else where in the country. The hardest part is since all the emergency services are volunteer driven and require young people to manage it they are having a tough time keeping it going. Schools in the town have closed down since there are barely any kids left. Kids in town have to travel about 30 miles to the nearest school. As we talked it became apparent that small towns in country have a huge problem which they are unable to solve at the moment. The government hasn’t been able to help. We packed up our bikes and left to the shop to get coffee. Our plan for the day was to ride as much as we could into Idaho and find a place to sleep.  We hoped we could get as close to Whitebird as possible.

Our first stop on the way to Idaho was Scotty’s. A gas station on the border of Idaho. The river on the other side of the street separates Oregon and Idaho. While sitting and chilling at Scotty’s it started to rain. Quickly ducked into the shelter for a few minutes. As we were waiting for the rain to stop a really old car pulled up. Started a conversation with the gentlemen who owns the car and turns out that the car is over a 100 years old. The car was in mint condition and everything except the shaft was original. He had a workshop setup at home to fix any parts that break. He had also found a small company that manufactured tyres for older vehicles. Don wanted to know how much the car would cost in the present day. The range was 250,000 dollars. Imagine driving a car on the street worth that much and hoping that nobody would crash into you by mistake. He also told us about the car rally that he was a part of. They had 20 cars that were passing by this route. They were driving 2700 miles in 9 days. All the cars had to be over a 100 years old in order to participate. 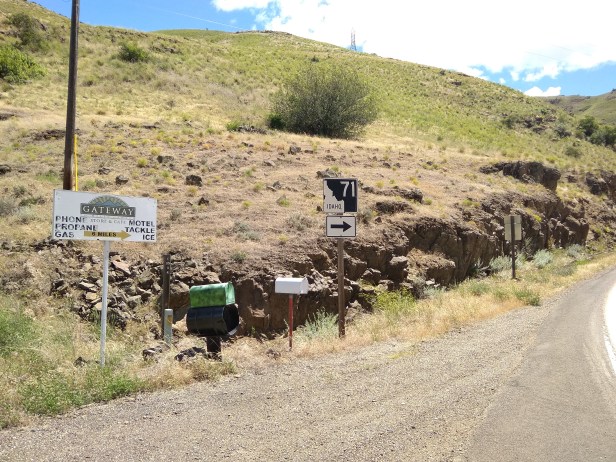 Slowly started to climb into Idaho. The hill near the power plant was hard and a little long. The climb from the base to the top took over 3 hours. On the top of the hill we could see the reservoir and the turbine. The hard climb was worth it. You could see people fishing and using speed boats around the reservoir. The thing about America that I have noticed is that everyone seems to be pulling something. Most people on the roads are either pulling a caravan / boat / trailer . RV’s seem very popular in the area’s that have national parks. We took a couple of pics and slowly started coasting downhill. Again in a few mins after following the river we had to climb again. Finally hit an elevation of 4171 ft.

After 3 hours of climbing we got to the summit

Now it was downhill and we should be able to coast till the town of Cambridge. As luck would have it the direction of the wind changed and we got hit by headwinds. Made our way slowly to the town of Cambridge where we quickly got a cup of coffee. This was our actual long stop after scotty’s. We had stopped for lunch for about 10 mins earlier somewhere on the road.  Since the road was narrow and we couldn’t find any place to sit down and eat we had to hurry up. At Cambridge we found a small grocery store. Sat down and ate a little supper. it was almost 6 in the evening and this would be the only place in town that would be open at this time. After eating and a cup of coffee we decided to ride tot he town of Council and find a place to sleep.

The power plant between Idaho and Oregon

Scenic ride after crossing over the border

A few miles and at Council we rolled into the gas station. Asked for directions to the camp ground at the city park and went to find it. Turns out the city park did not have a covered area so looked around to find a church. While looking for a church I found the Post office. Don in the meantime found the church. The Church was closed and Don wanted to sleep outside under the overhang. I decided to sleep inside the post office since it was nice and warm. Went down to find the restrooms and cleaned up for the night. the only place open in town was the bar. Went into the bar and turns out they don’t serve coffee. No point hanging around. Back at the post office Don decided that the overhang outside the church would be super cold so decided to sleep in the post office. Setup our beds for the night and discovered that the post office had charging points. Put our phones to charge and just as we were going to sleep a lady walked into the post office. Thankfully she was a little friendly and rather than freaking out about strangers sleeping in the post office she chatted with us about our ride. I asked her about why she is at the post office this late. Apparently she works till 6 in the evening and then drives to school which is 2 hours away to get to class. She finishes only by 11 and on her way back runs some errands. That seems super strange. After she left we quickly fell asleep.

Our home for the night

It had started to rain outside, thankfully it was nice an warm in here. its super nice getting to the 2nd state. Also 1000 kms done and 5500 to go.

Lesson for the day : There are no light switches inside post offices and you would have to sleep with the lights on.