After a warm night in the hotel room all of us woke up reasonably early. I went out and got a cup of coffee at the lobby of the hotel. Turns out they had free breakfast so quickly packed up and went to get breakfast. I was the last one to eat some breakfast. Micheal had left a little earlier. He is usually on the road by about 6 am. Don had breakfast a little while ago and was ready. He waited around for me to leave. With breakfast done and an apple stocked up for later we hit the road. The plan for us today was to get to Idaho or the campsite near the power plant on the border. LE wanted to go further. Each of us had would ride on our own pace and see each other somewhere on the road. Baker’s city was at the bottom of the mountain. Slowly we made our way up.  As we climbed up we came across a historical marker.

Site where the tree was axed down

Wagon tracks from the time trade was done using caravans had been marked out. The path still existed and protected by the government for everyone to see. Its fascinating to see how cargo was transported on a particular route. Over the years tracks of the wagon’s traveling on the same route has left behind wagon tracks. As we continued a little further we came across a sign that spoke about how the valley had just one tree and some idiot cut it down. The tree was used as a marker and possibly on a super cold night someone cut it down to stay warm.

As we continued riding on the Hells canyon route it started to rain a little. We quickly kept riding till we got to the small little town of Richland. Just as we stopped at the grocery store it started to pour. We ate sitting out on the bench waiting for the rain to stop. Now it started to get cold. Went into the store to get coffee but they dint have that. Apparently nobody drank coffee in town int he afternoons. Got a coke and come tomatoes to make a sandwich. A nice peaceful lunch and we were ready to go.  The rain had stopped thankfully but it was getting cold. 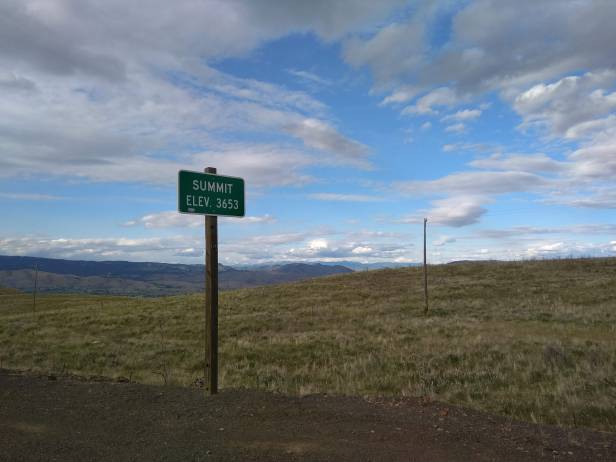 The pass before Halfway 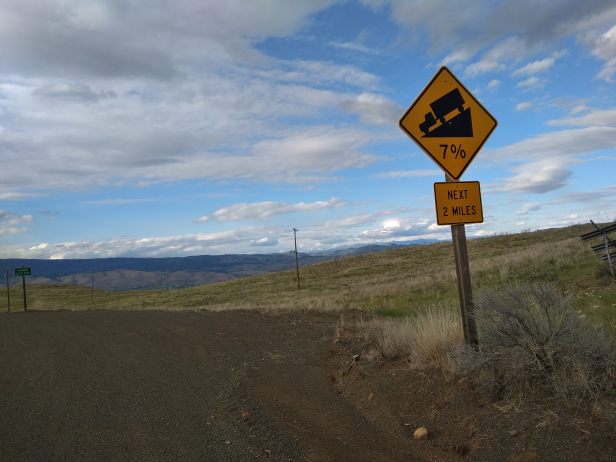 Gradient that we had to climb

From Richland we had to go over a pass to get the next town of Halfway. Slowly over the pass and descended in the cold. At the intersection of the road we decided to go to Halfway which was a mile off the route and find a place to get coffee. It was only 6:30 and we could ride a little while longer. Halfway was the only town between here and Grangeville. We decided to ride into town and get a cup of coffee and take it from there. Reached and they had a grocery store. Picked up some chocolate and carrots. Thy dint have coffee but showed me a bar where they served coffee. Meantime Don disappeared.

The town of Halfway

As i sat outside the bar having coffee Don showed up a few minutes later. He had managed to find us a place to stay for the night. The first church that he went too had told him that he couldn’t sleep there but one the guests at the church had helped him find the caretaker of the other church in town who was happy to help. Don wanted a warm meal so we into the bar. The all you could eat salad bar seemed perfect. With 3 plates down we headed towards Pine valley Presbyterian church.  The fellowship hall at the church was perfect. Wood floor and with the heating on seemed like a perfect place to sleep. As i was putting stuff away i noticed that i had lost my glasses and gloves. Quickly ran back to the bar and found it outside on the pavement. I love these small towns, nobody steals form you and if they find something they set it aside. Walking back from the bar and it was super cold. It seems to get colder faster here.  The advantages of sleeping inside a church is I could charge my phone and music player. The disadvantage is i cant smoke inside. Small price to pay to stay warm. Seemed like a really nice peaceful day. Everyone has had a pleasant day. Micheal got to the campsite at the bottom of the power plant near Idaho, LE crossed over the state border and was riding towards a town. 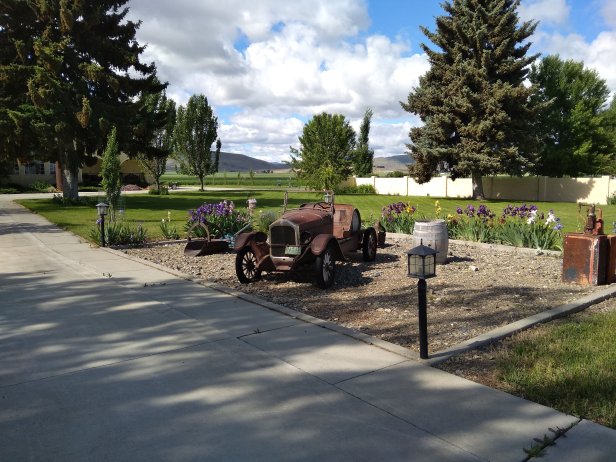 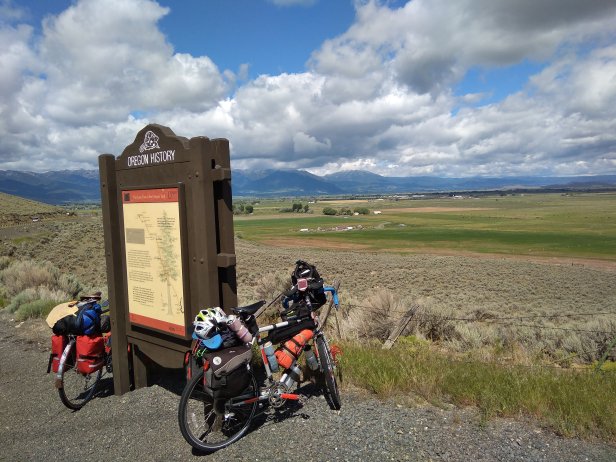 One of the many pictures of the bikes

Lesson for the day : People don’t steal from you in small towns.