After a peaceful night sleeping net to the river we woke up to a super cold morning. With no place to get coffee at the camps ground we decided to pack up a little sooner and head out. Just as we were packing up Forest woke up and offered to make me a cup of instant coffee. A quick cup of coffee and we were on the road by 7 am. The plan was to climb over the pass and get to the town of Hamilton. Thats over 120 miles with a  steep climb to the top of Lola pass. The only place to get some food or a drink would be at Powell. We filled up our water bottles and got moving. A few miles down the road we reached the town of Lowell. The town just had a resort and nothing else. 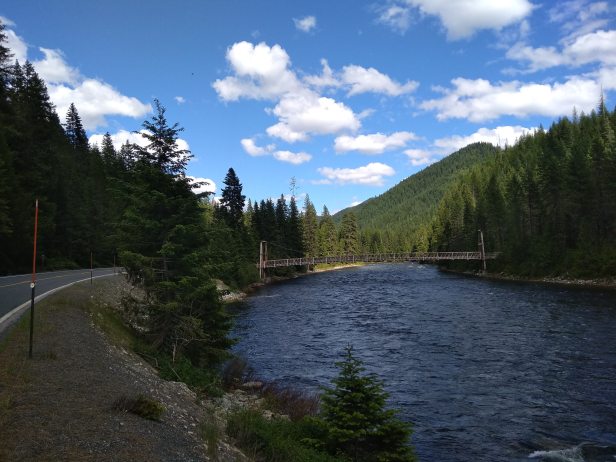 Uphill all the way to Lola

After a quick cup of coffee which was quite expensive we hit the road. Today would be one of those tough days without any place to fuel up in between.

As we continued to ride construction crew s were putting up stop signs. Turns out the road was going to get fixed. A mobile traffic light was setup and traffic was regulated. We waited for a few minutes and decided rather than sitting on the bike doing nothing we could just stop and have lunch. Stopped for lunch on the side of the road. The usual bread and peanut butter.  As we finished eating the construction crews had opened up our side of the road. Don wanted to quickly go.By the time we packed up our food bags, they had closed the road to traffic. We would have to wait for 20 mins. I went a little ahead and found a spot under a tree to take a nap. Got woken up few minutes later by an old lady in a car. She wanted to give us some biscuits and water. Thanked her and took the food. Snack for later. As the crew opened up the road Don sped ahead. Since I had a cup of coffee in the morning and none after that I wanted to check with the construction crew if they had a pot going. With none available i rode on.

After a hard 40 mile ride we reached Powell. Calling it a town was a stretch. Nobody lives here except the folks at the resort. Quickly went in and got some coffee. Restocked on some smokes since i was running low. Mooched of their wifi to check messages and found out that the visitors center on top of Lola pass had free coffee. Don in the meantime found out that we could camp outside the lodge and would need to pay 5 dollars for a shower if we had one. The option was to either sleep here in our tents or ride over the pass and find a place to sleep that was actually covered. Since it was cold at night, sleeping in the tent wasn’t really something both of us looked forward too.  We decided to start riding and get over the pass. That way we would be in Montana. Started climbing and the road went downhill for a couple of miles. Turned around to check if i was on the correct road. Finally hit the steep uphills. Took a long long time to get up to the top of the pass. Don had gone ahead and found the visitor center closed. Since it was already dark by the time we climbed up and we dint want to descend in the cold we would need to sleep in the bathrooms of the visitor center. The good thing was at least it had a power outlet to charge our phones. Noticed that we were in Montana or at least on the border between the 2 states.

Scenery as we rode

As we settled in for the night it started to rain a little. It got super cold. Even though we were sleeping in the bathroom for the night atleast the heater was on and it was warm. Don had taken the men’s room and i was in the women’s room.As i was sitting outside smoking we had a visitor. A couple had stopped by to see the visitors center and when they saw me sitting outside they were a little startled. Once they saw the bike they were a little comfortable. They chatted with us for a little bit and they told us about their daughter who rode from Portland to Seattle and back. Gave her details about the race so that she could maybe tell her daughter about it and just maybe she would be interested in it. The old lady wasn’t pleased, I don’t think she will pass on the message. . Thankfully the visitor center would open at 8 in the morning and we could get coffee. Its interesting to see a beautiful visitor center in the middle of nowhere. Onwards towards the town of Lola tomorrow. Don wants to go see the Adventure cycling headquarters in Missoula, Montana which is about 10 miles off our route. They gave out free ice cream to every tourer / racer who visits. Hard to say no to free ice cream.

The agency who maintence the wonderful visitor center

Lesson for the day:  Bathrooms if open are warm and a good place to sleep