Woke up at 7 am in the morning. A nice warm night at Larry’s house. They had an old school wood burning stove to keep you warm. Clothes that i had put out was nice and dry. It was still raining outside with no sign of letting up. Larry had noticed that the sky was clearing up far away. He was sure it would stop raining in a couple of hours. I guess when you are local you know how the wind blows and can read patterns. They were dropping Chad off at Missoula later in the day. While waiting for the weather to improve Larry showed me around. He had a wood working shop where he build plenty of stuff.

The house the Larry built

He built the house he lived in along with 3 other houses. Apparently the first house he built was when he just retired and was living on a trailer on the land. His wife was still working and would join him a year later so in the meantime he built the main house.  He even managed to sell one of the houses and just recently sent it on a truck for the person who bought it. Strange that a house can be relocated from the land, this would never happen in India. Walking around the house i asked him about why he has 3 trailers at home. He looks around for a good deal and buys cars and trailers to be resold later. He even managed to find a trailer for 50 dollars. Since he does some glass work he takes the stuff in one of the trailers to sell it. He also told me about why the choose to move to Montana. The state has no Income tax or sales tax making it cheaper to live here. His kids live in larger cities but he hates going into cities since they are super crowded. Walked around and then to the kitchen for breakfast. Lovely oatmeal and Bacon bits. In the meantime it was 9 am. LE pinged about the charger. Quickly packed up and got ready to go. Jo was going to ride with us too. Just as Jo got ready it stopped raining.

Loaded and ready to go

Loaded up the truck with 4 bikes and bid adieu to Chad. I may see him at Springfield, he has space to host us. Larry dropped us at Dairy queen. Don rode back towards the interstate and i rode towards Mcdonald’s. Reached the hotel LE was at. He wasn’t happy that i was late. He seemed pissed. Don had found a place for us to stay at Ennis and invited LE to join us. I don’t think he wanted to do that. Stopped at McDonalds for coffee and picked up a couple of chargers at the family store next door. While waiting for Don, Edwin showed up. Told him about our plans to go to Ennis. He would figure out if he would like to stay with us tonight as it maybe a little out of his way to Boseman. Met with Don and started to ride to the town of Twin bridges. Our plan for the day was to get to Ennis. We had a host who would let us stay there tonight.

A quick pic before we hit the road

The road to twin bridges had lots of traffic. Had to be careful since the road had no shoulder. A couple of times trucks came quite close but nothing too serious. Finally reached the town. Here Jo would take a left and we would go right. Had a nice cup of coffee and a little food. Don had gone a little ahead and had stopped at the grocery store. When he was ready we decided to hit the road. About 20 miles later we reached the town of Sheridan. I stopped for coffee and Don went on. After a quick coffee break headed towards the town of Alder. Just kept riding on since it was already 3 in the afternoon. Since we were staying at someone’s house we had to get there at a reasonable time. Slowly rode to Virginia city. A small tourist town with a mid west theme. With no time to stop we pushed on. We started to climb over a pass. Just as we were climbing it started to rain. Slowly got over the pass and a really beautiful view and a long downhill towards town. As i coasted downhill i saw Don warming himself up inside the post office. He was on the phone with our host getting directions. I went ahead to the gas station to get coffee. After coffee we started to follow the directions to Johnathan’s house. A few left turns and right turns and a gravel road and we landed up at his house.We also managed to see a moose on the road. He was standing quietly on the side of the road and i just happened to notice it as i wanted to stop to water the bushes.

Johnathan lived in the middle of nowhere on a large piece of property. He had a separate room built over the barn for guests. Parked our bikes in the garage and walked into  the fields to the Barn. A lovely room with beds and a heater. They even had a kitchen. They usually rent this place out on Air BnB. Lucky for us it was free on warm showers. As i talked to Johnathan discovered that he just started cycling but had done a long 800 km kayaking trip in Alaska. He used to be in the Forest department and always wanted to go into the wild. He was telling us about the trip and how he came close to be eaten by a bear. 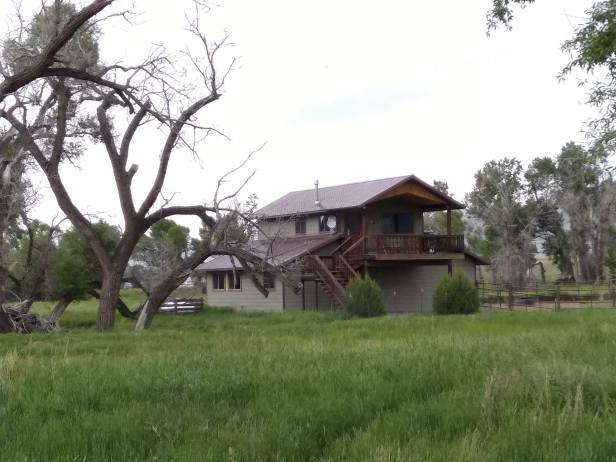 Our Bedroom for the night

After a really nice conversation we quickly ate some food that we packed and hit the bed. It was raining but hopefully would stop super soon. Hopefully tomorrow would be a nice sunny day.   Maybe at yellowstone we could get a nice day off and chill and not ride the bike. Lets see.

With the man who fought a bear

Lesson for the day : Do not try and mess with a moose. They will head butt you.

Up Next : Day 18, Ennis to West Yellowstone