Woke up in the cold campground. My back ache had finally gone away. A good night sleep is all i needed. Since there wasn’t a store nearby we quickly packed up to go into town. Don wanted to buy supplies and quickly leave and I wanted to take it a little easy. Just as we were packing up the campground host came to visit. Don went to chat with them while i was checking my messages. Micheal had a sent a note on the group saying he was going home. After his accident at Baker’s city he had an ACL which got worse a few days later. Quickly sent him a note hoping to meet him before he went home.

Started our ride to the town. Don was telling me about how the bad the traffic at the park gets and we should ride quickly to get the entrance ticket. We rode to the grocery store to pick up some supplies. Turns out they don’t have any coffee. Asked the store to charge my phone and they refused talking about liability. That was a first, they were afraid of the phone breaking or getting stolen. Told them that i dint care but they did. After buying some chocolate and bread which turned out to be 28 dollars. Same thing a few days ago would have been like 8 dollars. We headed to meet Micheal who was trying to find a bike shop who would ship his bike back home. Met him and walked to him to the Fedex store who wouldn’t box his bike. Went to the bike shop and they couldn’t help either. Made plans with him to meet him tat McDonald’s. The first thing we did was to put our phones for charge. After a longtime the sun was out. Finally it seems like the rain was letting up. Maybe we would get some sunlight for a few days.After a quick chat with Micheal who seemed gutted and our phones fully charged we decided to head on out. Micheal would come and see us at the finish line. Super cool of him to drive 4 hours to come and see us finish, 4 hours is a long way. Maybe this is how all cyclists are, usually willing to do nice things for everyone. 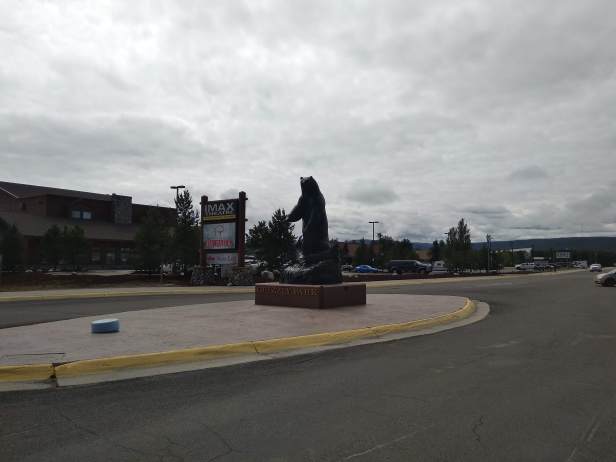 First glimpse of the Yellowstone

The ticket booths that we paid 20$ to get in

We started to make the ride into the park. First thing we had to do was get a entry ticket. Don was first in the long queue behind a bunch of cars. He helped the ticket collector work the system to get us the correct form of the ticket. Entry to the park was 20$, this did not include use of the campground or even  chocolate. Such is life. We decided we would ride till we hit the Old Faithful. While riding we happened to cross a few geysers. Stopped to look around. Don had been here 25 years ago when he came here with his son to show him around. For him the moment was nostalgic. Spent a little time looking at the different geysers in the park before heading towards the Old Faithful. I have always wanted to see it and its amazing on 20th June I was here. Years ago after I had finished a long ride across India, I had decided to set a date to travel around the world on a bicycle. Made the plan without knowing how to come up with the money for a journey of this magnitude. Finally after what seemed to be a long ride we reached Old Faithful. Since Don had gone ahead I went looking for him. Got a cup of coffee at the shop next door and as i was finishing up a couple of kids told me about where Don was. He was on the other side of the park waiting for me. Quickly rode up and found him. He had found out that the Geyser would erupt at 5:40 , which meant we had 20 mins to go. The guys at the store were willing to put our phones on charge and we quickly headed out. 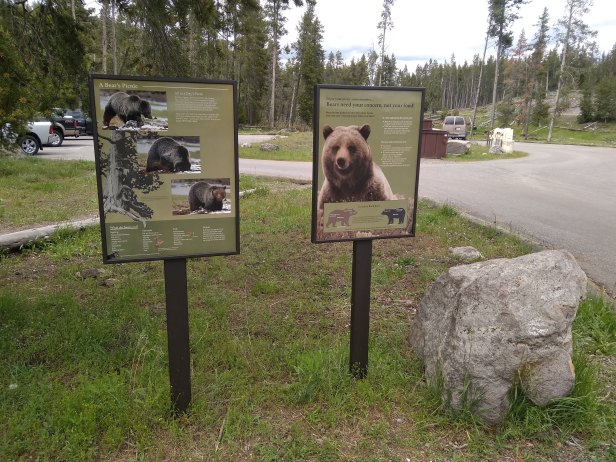 The area around the geyser ( a safe distance ) was now filled with people. At 5:40 pm no sign of eruption. At 5:43 pm it started. Beautiful and loved how it went off. Started slowly and went on for a while. We took pics in front of the geyser and headed back to the store. Had a quick snack since both of us had skipped lunch and headed towards Grant village to the campground. As we rode through we got stuck in a traffic jam. Bears on the side of the road and everyone had gotten off their car to take pics. One tourist was walking towards the bear to get a better pic, dumb ass.  To reach the campground we had to ride about 30 miles crossing the continental divide twice with a maximum elevation of 8391 ft. We finally reached the store and campground near Grant village. The laundry mat that was closed had a couple of people cleaning it up. Tried asking them if we could camp there and they said no. Pointed u to the campground a few meters away. Rode to the campground and Don went in to chat with the host. They were just closing up but would let us stay there. 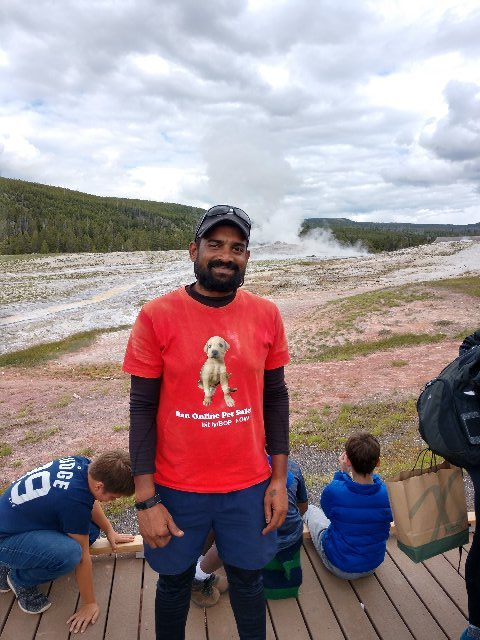 At the Old Faithful

We rode to the campsite allocated to us and saw that another cyclist was already there. The hiker/biker policy ensures that anyone on a bike coming to a campsite will always get a place and wont be turned around. Introduced ourselves to KC who was riding to Wisconsin. Don scared her a little by asking her if she was heading to Wisconsin even before she told us that. Turns out the campground host this morning at the town had told him about her traveling through. She had camped opposite to us last night. Anyways quick chat with her and put up our tents. It was cold and it should get worse if it rained. Thankfully no sign of the rains. It was about 11 pm by the time we got to bed. My back feels good and no sign of the pain. A good day riding and exploring.

Lesson for the day : Bears are meant to be seen at a distance. No selfies allowed with them.

At the Continental divide

Scenery on the way

The first geyser i have ever seen

At the town of West Yellowstone

Up Next : Day 20: Grant Village to Togwotee pass campground