Woke up a couple of times in the middle of the night as it was super cold. I should have put up another ground sheet under my tent but I had gotten lazy and paid dearly for it. Woke up and had made plans with Aaron to meet him for breakfast. Packed up our tents slowly trying to warm up while doing so. Finally got on the bike and headed towards the gas station. Met with Aaron at the restaurant and made plan to met him at the gas station. At the gas station bought a burger which even after heating it was disgusting. Aaron rolled in. He has been having knee pain and had to take it easy. Decided to start for the day and try and get to Silverthorne so that we could get over Hossier the next day early morning. 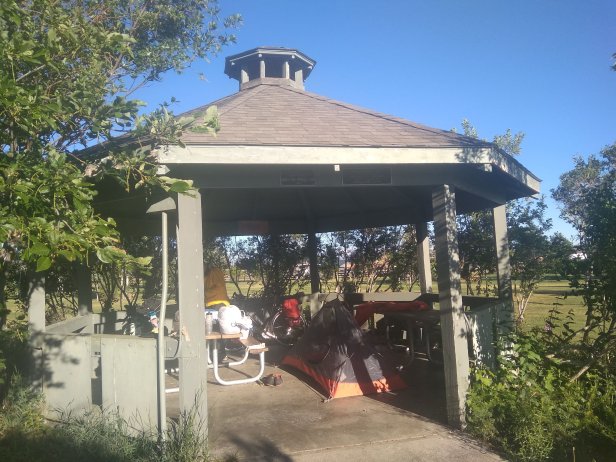 Our camping spot from last night 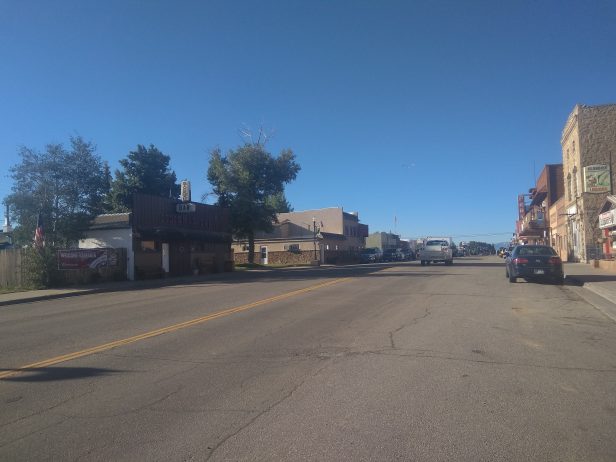 The town of Walden

Our start from Walden was a little later than usual. It took about 2 hours to get to the town of Rand. Everything in Rand sadly was closed and had to push on. Thankfully  had 4 liters of water and had filled all my bottles before i left to Kremmling. The plan was to ride to Sulphur springs for Coffee and then onward to Kremmling for a late lunch and then to Silverthorne for supper. As i started climbing towards the top of the mountain towards sulphur spring it got super hot. Kept drinking plenty of water. It took a long long time to get to the summit of the willow creek pass. At an elevation of 9683 ft I was higher than ever before. Stopped for a few minutes to have a smoke and then everything went to hell from there. Started to feel woozy. A small downhill which wasn’t very pleasurable and finally got to the junction where I had to take a right to go to Sulphur springs. Decided to stop and get a bite to eat hoping to feel better. I had make a choice on where to sit down to eat. Kept asking myself if what i was doing was the right decision. Sat down on the shoulder and made a sandwich. A lady stopped by to check on me. Sweet of her to stop. 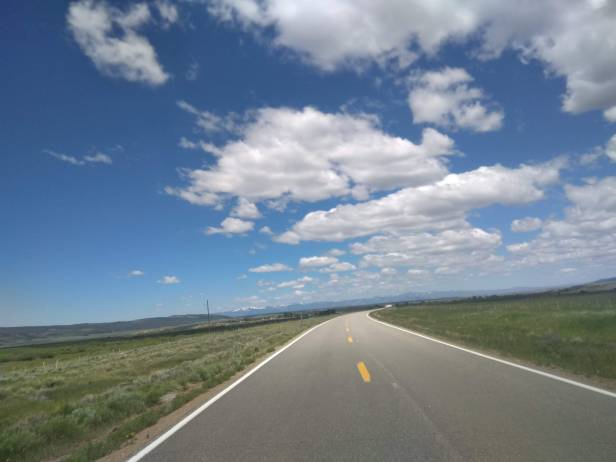 Continued to ride towards the town and finally got there. Turns out Don and Aaron had just about reached there. Don had bought a bottle of water and he had just run out. I had run out of water. The altitude was getting to us. A quick meal at the gas station and a cup of coffee and I was back. Seems like not eating a breakfast was a problem. We decided to ride to Kremmling and stay at a hotel for the night. Don called a hotel and got us a brilliant deal of 25$ a night. As we started riding to Kremmling, Aaron and I started to talk and ride. His longest ride before this was 70 miles, he had trained to run a marathon a few months before and that had kept him going. its takes balls of steel to even think of riding a bike 4200 miles if you have only ridden 70. Its amazing to see his commitment to finish in spite of his knee pain and saddle sores. As we continued to talk he told me about his 2 year volunteer experience in Africa. As a part of his service commitment to church he went to help people out in Ghana. Told him about my experience of meeting Mormons in Russia while sitting outside a shop selling coffee. Got a quick education in Mormonism. 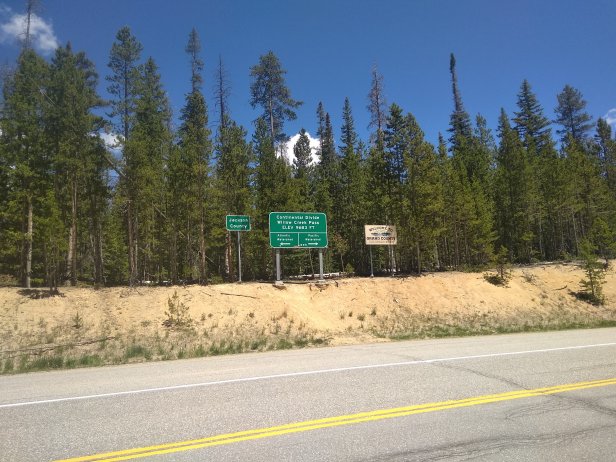 On the summit of Willow Creek Pass 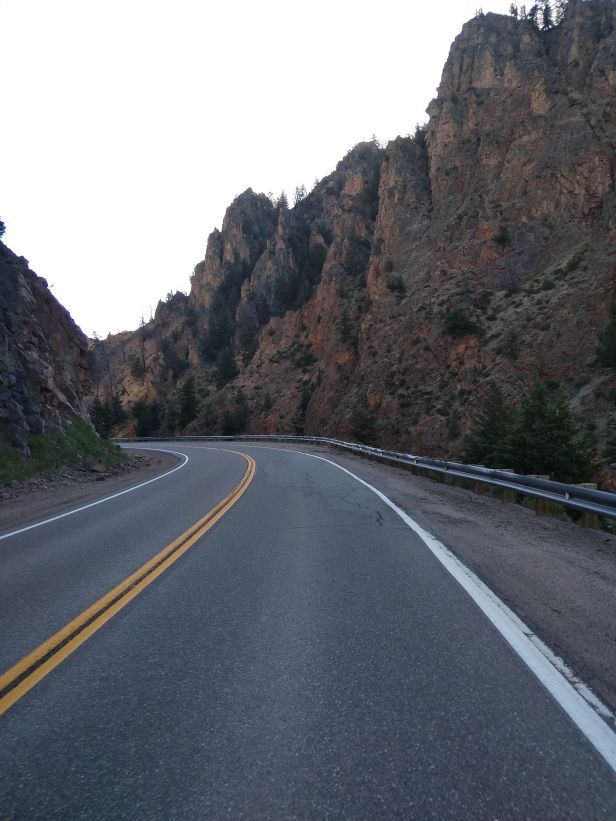 On the road towards Kremmling

Finally rolled into the town of Kremmling. Went to the dollar store to get ear phones since mine stopped working over the pass. Rode down to the hotel to meet Don. Hotel Eastin was in operation from 1906 and the new owners had renovated it. The theme was the Wild West and they had free popcorn. They would walk you to the room and show you around like they would back in the day. Put our bags in the room and the bike in the garage and set out to the grocery store to stock up. I have to buy a new pair of socks since mine is stinky. Need to wash up my shoes at Peublo. Got Aaron to buy me ice cream near the grocery store and sat outside taking eating it. A good day. Even though the middle of the day was horrible the end of it seems wonderful. After a couple of scoops of homemade ice cream went back to the hotel. At the hotel met another tourer who was riding from Iowa. He was wandering and looking for new trails. His steel bike was brilliant which he let me take out for a small ride. A quick shower which was amazing after a long time and off to bed. Tommorow is the big day. The last big pass before it gets warmer. Now i can send back all of my cold weather gear to Yorktown and get my bike to be a little lighter. Lets see how that works. 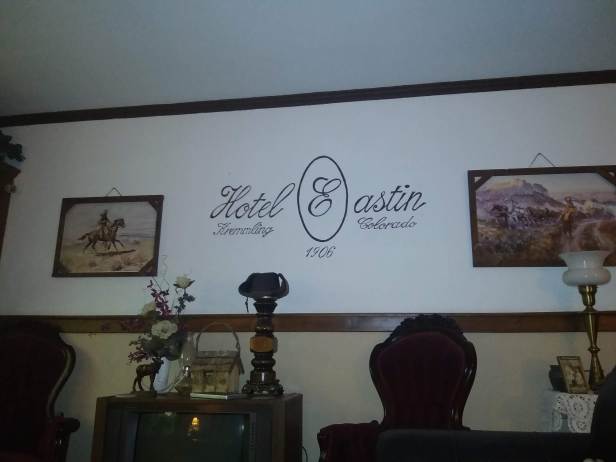 Will definitely recommend this place 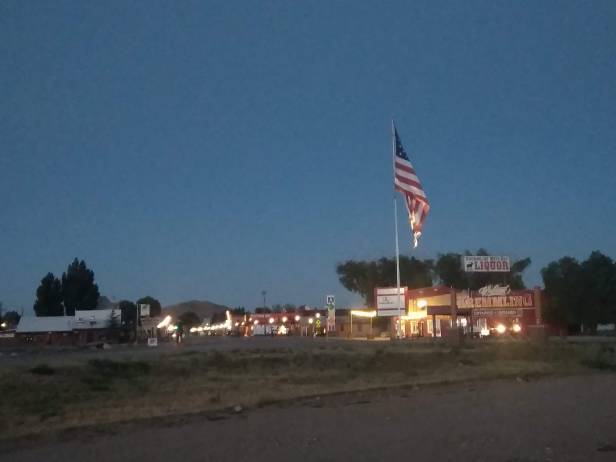 Center of town. Flags seem to be put up everywhere

Lesson for the day : Always eat breakfast before you start a big climb.

Up Next: Day 25, Kremmling to Alma