Woke to a stinky room at the hotel. Aaron and My shoes really stunk up the place. Got the hell out of bed and out of the room. Went up and met the tourer who I had seen last night. Quick chat about the route around here and his story of his experiences in the army. Made some breakfast, ate a little extra just incase. I dint want a repeat from yesterday. Packed up my gear on the bike and pulled out a couple of warm weather gear just incase it gets cold while climbing Hoosier. Today’s the day i was told is the hardest pass. Not because its a hard climb but because it is the highest point the trans am bike race goes over. The plan was to get over the pass and roll down to somewhere after that and camp or sleep at a  church. After yesterday have to be cautious in trying to even get somewhere. 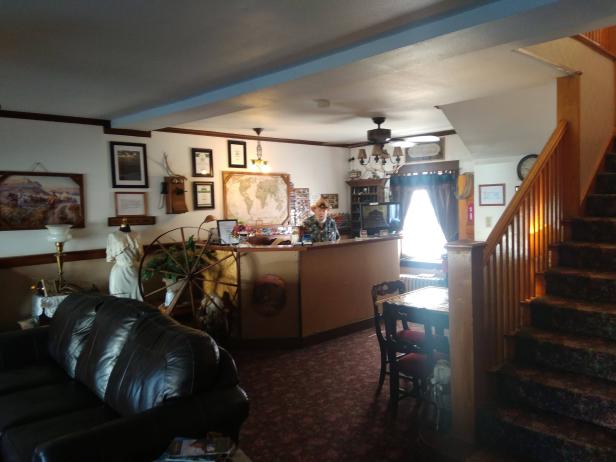 We started our day slowly riding towards to Silverthorne. The road slowly turned into this small recreation loop that there was a lake on. The turning was super small and could be easily missed. Kept riding on the route and came across a father and daughter duo who were riding across the US. A quick conversation and off i went. Don and Aaron had gone ahead. Turns out they had missed the turn. Climbing up a hill after the lake Aaron caught up. In a min of meeting Aaron we stopped to see the bald eagle. Aaron spotted it and a nest. We met a bunch of tourers going the other way. They had run out of water, gave them a bottle of water that i had. As we kept talking figured out that they needed to know about stops on the way. I had a pdf document that i had printed out about the supply points between each town. Since it was of no use to me now gave them that. Said our good byes and hit the road to Silverthorne.

Reached the town of Silverthorne. Stopped at the gas station for coffee and some lunch. While sitting there the gas station employee started to chat with me. Turns out that Silverthorne is super expensive. She lives in a hotel because apartments are super expensive. This is a tourist town which exists because of the lake or skiing. To get to Breckenridge we had to take a bike path. The path in Silverthorne was hidden  away. Finally found it and discovered that the first 500 m was super steep. Finally started to ride and was super nice to be away from the traffic. As we kept riding we had to stop for a little bit since there was construction work happening. As i waited ran into a couple of mountain bikers who were racing the divide. Chatted with them about the race and got to understand a little more about it. This could be a ride I would like to ride. Cathy’s mountain bike would work excellently.

The quiet lake that we found in the middle of nowhere

The town near the lake but no place to buy anything

At Breckenridge we stopped for a bit to get some food. It was 6 pm in the evening. We figured we would ride over the pass and stop at Alma for the night. Since Breckenridge was also a tourist town it was expensive to get food. After supper we headed out. It took me about 3 hours to slowly climb Hoosier. Finally on top at the summit of Hoosier pass. Thankfully it wasn’t snowing or raining so lovely weather. Took a couple of pictures and started to coast downhill. Going downhill seems to be harder but this time around i really wanted to get down quickly. About 20 mins later landed up in alma. Found Don and Aaron siting in the post office. It was nice and warm inside. Don wanted to sleep outside in the campground but Aaron and I decided to sleep in the post office. We dint want to sleep in the cold. Don after checking out the campsite came back to the post office. The campsite was already occupied by a couple of cyclists and there wasn’t any space for another tent.

Climbing to the top of Hoosier pass

The post office thankfully had a power outlet. Plugged in the phones. Turns out Alma dint have any cell reception so couldn’t call home. Hotspot from Aaron also sucked. Barely managed to get a video from home before it got cut off. Anyways it was a super good day. We did about 81 miles and climbed over the highest pass across the race. Even though it is cold outside tomorrow onwards it should warm up. Looking forward to get to Kansas since it would be warm. Just have to make sure I have enough water while riding. From here on till I get to Missouri I have been told that towns may not be as close together like in the past so will have to stock up. 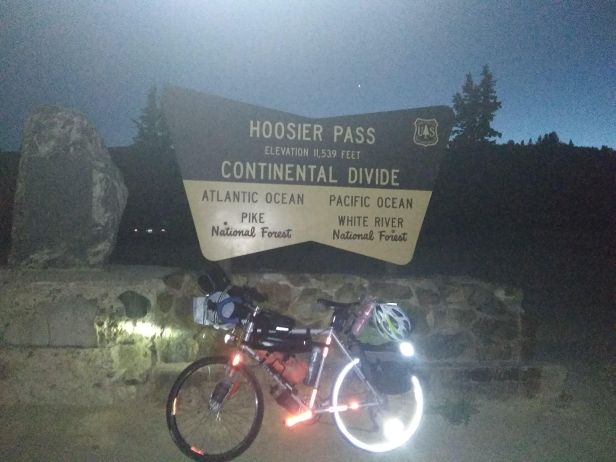 Finally on the top of Hoosier pass

Lesson for the day: Always carry an extra bottle of water to share.