Woke up in the morning with a cup of coffee thanks to Dale. Unlike other days we took it a little easy and not rushed out. We were checking with Dale and Michele the process of sending a package and getting the post office to hold it. Michelle who runs a business on Ebay that sells unique and antiques offered to send the package for us. She had a bunch of packages to send out in the afternoon and send a couple more wouldn’t be a problem. She even had a weighting scale and a business account which meant she could print out the address label and have the box ready to be shipped. Also she got a discount since she had a business account.

Michelle helping us send a box to Yorktown

Got a box and started to sort stuff that i would need till i get to Yorktown and throw the rest of it in the box to be shipped. Turns out i should have just done that in the beginning. I think i carried way to much. I sent away all my cold weather gear except for a jacket. The hardest choice was if i should keep the tent or not. I figured that i had only used the tent 3 times the entire time. Sent the sleeping bag and tent away but luckily kept the ground sheet, Sleeping bag liner and Insulated thermal pad. Now the bike was nice and skinny. In the front i had a food bag. The back had a dry bag with a couple of clothes, cycle spares and my medical kit. On top of the bag was a compression bag with my stuff to sleep in. I even gave away my flip flops thinking i wouldn’t need it. With everything packed up and weighted ( about 12 kgs ). Since general delivery at the postoffice can hold the box for more than 15 days I had to find someone to hold the box. Called Bike beat, a bike shop in Yorktown who quickly agreed to accept the package and hold it for me.

With Dale and Michelle at Florence

After a morning of sending stuff away we were on the road. First stop the town of Pueblo. I had filled up all my bottles before we headed out just in case. Learnt that from yesterday. Since there were no town between Florence and Pueblo i had to stock up. The ride was hot and hilly. No pit tops on the way and no water. By the time I was halfway through i was almost out of water. I still had one bottle of water which was warm. Stopped by the street and tried and flag down a few cars. Finally seeing the open bottle in my hand one car stopped and gave me a couple of bottles of cold water. After that killed it. Finally after a nice ride downhill i reached the town of Pueblo. First stop at the gas station to get a coke. Just as i was finishing got a message from Don with the address of where he was. Met him at the Mexican restaurant and quickly had lunch. Our plan was to ride to the town of Ordway and sleep in the city park. Aaron was at Ordway and had check out the park and sent back notes.

Somewhere on the way

Just as we were leaving Pueblo got an email from Natan, the organiser of the race saying we could take any route we want if we dint want to go through Kansas owing to the accidents that have happened. Sent back a note thanking him for the option but will continue on the same one. After picking up supplies at a grocery store that we had go go about 5 miles away we headed towards Ordway. As we headed out towards the highway the winds were steadily getting stronger. Headwinds and only was getting stronger. As i turned off the main highway from Pueblo  we hit a town called Boone. The winds had gotten super strong and while riding saw Don sitting in the city park. Don was getting blown off the bike and wanted to stop for the night. Made sense we were barely making progress. I was counting on doing large miles when i hit the plains but the winds have been interrupting those plans. The City did not have a Gazebo so we had to find a place to sleep in the open. The park and the fire station were next to each other. Tried all the door but they were locked. We decided to sleep against the wall of the  fire station hoping for some protection against the wind. The park had a loo but no power outlet. Outside one of the building next to the fire station there was a power outlet. SO with sorted i went for a walk into town to find a place to get coffee.

The town of Boone was almost run down. Nothing open and no shops in sight. As i was walking down I saw a house that looked like a cafe open and walked in. Turns out it was someone’s house. At first they were a little hesitant but warmed up in a few minutes. Kate and Kat just moved to town and the house they lived in was being setup. They were trying to figure out what kind of business to start and a cafe seemed like a good idea. Kat did make some good coffee. While talking discovered that one of them had cancer and would need to go to Arizona to the clinic. They moved here since it was cheap and now had setup a small thrift store to make ends meet. They told me about the town and how the economy had collapsed. The water was not drinkable and for water they would have to get it from Pueblo. Chatted with the for a little while before heading back to the park. Told Don what had happened and all he wanted to know if they would give us coffee in the morning. Finally setup for the night. Bed roll out we went to bed. The wind was super loud and we hoped it wouldn’t rain. Very hard to sleep with howling winds in the background.

With Kate and Kat.

Lesson for the day: If you run out of water open up the bottle and invert it while flagging cars down. They will stop and give you water. 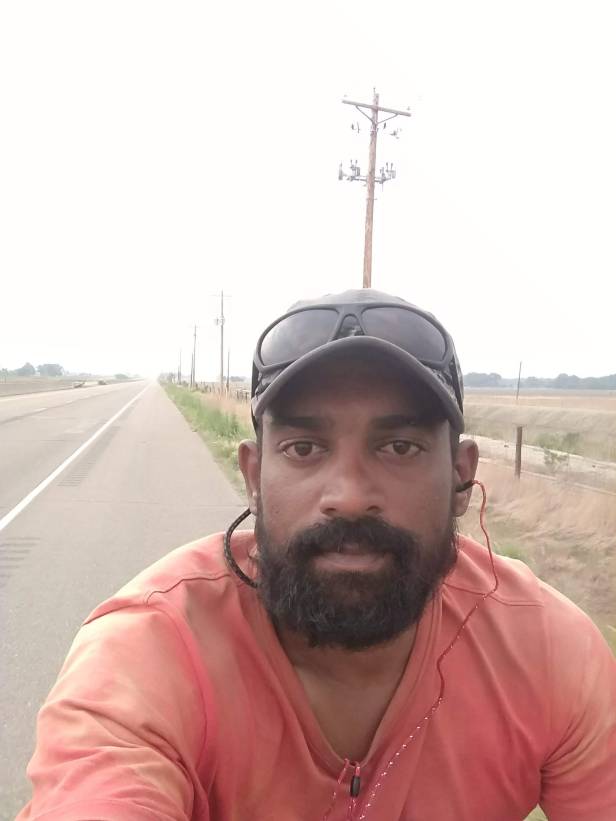 Finally without a jacket