After suffering through a cold night at the city park Don and I had to rethink our plan on places to stop. We figured that last night was an anomaly and shouldn’t happen again. Just to ensure that i wont be cold pulled out the jacket from deep inside the dry bag. For the first order of the day we went  looking for the sign that told us that we were halfway across the trans am bike trail. The signboard was installed on the highway and I had passed it a few times yesterday while looking for the park. Quickly got our pictures taken and headed to the gas station to get coffee. The gas station was huge and had lots of food and a place for a shower. We got some breakfast and coffee and waited for it to warm up.

Started our ride knowing that the next big stop would be Sheridan lake. The winds had already picked up. The moment we turned off on the highway we got hit by some serve headwinds. Slowly crawled up towards the town. Took me about 3 hours with a really short smoke break in the middle to reach town. At the only store in town we got a sub. Apparently they don’t make coffee after 11 in the morning. Stayed in the store for a little while hoping the winds would die down. This would be our last stop in Colorado. On the road a few minutes later we were in Kansas. 5 States down and 5 States to go to finish. Don showed up a minute later. He had stopped at the church to drop off a Enlance broacher. Took a couple of pictures and headed out towards the town of Tribune. Our plan was to get to Tribune and get a bite to eat before going further towards Leoti.

The only structures on the road

Got on the road and continued to battle the wind. Stopped at the rest stop just to get away from the wind for a bit. Back on the road and finally got to Tribune. Found the grocery store and picked up some food. Interesting little store that has been functioning for 70 years. As i sat outside the store a couple of kids came to the store and while leaving stopped by offered me the change they had gotten back. As we were sitting outside the store eating a lady came up to us and told us that we could camp in the 4H shelter near the park for the night if we liked. They also had a shower that was attached to the pool complex. After the kids giving me change thinking I was a hobo I was wondering maybe it was time for a shower.

Decided to call it a night and get to the park and relax even though we had ridden only 57 miles.  Don had bought a pineapple which would be ready for us to eat tonight. Rode towards the park, found Don sitting on the porch getting his food bag ready. As i parked the bike, noticed the pool. Went to check if the entrance to the pool was open, a swim would be great. Everything was closed. As i was walking around happened to meet 2 cyclists. They were from Akron and riding the trans am route. We decided to jump over the fence and go for a quick swim. Jumped in and was chilling in the pool and a few minutes later the sheriff drove by. Quickly jumped back out. Don on the other hand did not want to go for a swim. He figured that the Sheriff would drive by or someone would complain.  The guys wanted to ride further and left to Sheridan lake. Just as they left 2 other guys rode in. Turns out they were riding from West to east. One of them was riding from New york and the other had flown to Yorktown from Denver to start his ride. Just as we were talking a strong wind brew through, almost like a storm. Quickly went running behind by cap and gloves. it started to rain so moved the bike and my stuff into the big horse shelter. It got super windy. Almost like a tornado. Chris who was riding from New york had gotten hit by a tornado at Eureka. He was in the city park when the tornado hit. Thankfully he escaped unhurt and with all his stuff. A few minutes later the storm died down and the sheriff pulled in. He wanted to check in to see if we were ok. Gave us instructions on where to hide incase a tornado comes through town. Setup our beds rolls between a few tables just to keep the wind out. It now had gotten colder. Hopefully this would keep us warmer than yesterday.

Finding ways to strap things on the bike 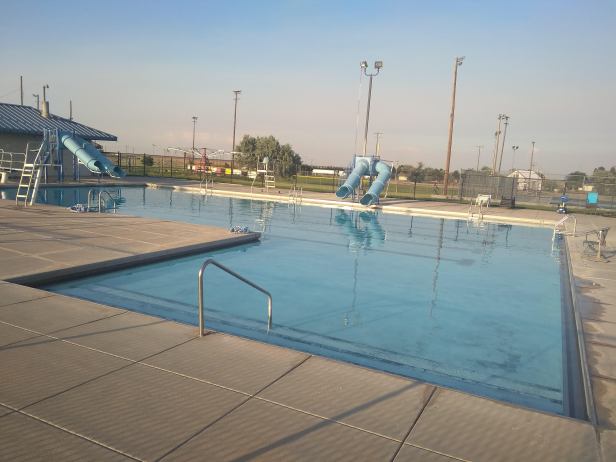 Thank you Tribune for the pool

Finally the day was over. After some Pineapple it was time to hit the bed. Maybe tomorrow would be a bette day. We now have to figure out what time to leave in the morning to ensure we could ride longer before the winds start.

Setup for the night

Lesson for the day : Pineapples are great as deserts when you cant carry chocolate

Up Next: Day 30, Tribune to Dighton