After a rough night sleeping on the cold floor woke up to a nice warm day. Turns out it had rained the night before and the temperatures had dropped. We packed up our bags and got ready to ride to the gas station to get a cup of coffee and a little breakfast. Made plans to ride towards Leoti and stop at the Eric’s memorial site on the way. We had been warned about this road and was asked to me careful. Felt a little uneasy riding on this road knowing that crashes happen at this point. For the next 40 miles we had to be extra cautious. LE on the other hand took a diversion and was on another route avoiding this junction.

After a nice ride to Leoti on a newly paved road we stopped to get a couple of tacos and a cup of coffee. The winds haven’t been very terrible yet but cross winds once in a while try to knock me off the bike. As i rode towards Scott city came across Eric’s memorial site. Andrew had given me detailed instructions on where it was. Stopped on the side of the rode and sat down for a little while. Picked up the things that was left for him and planned to ship it to his family when i got to Yorktown. Unfortunately the card that was left behind by one of the racers at the site was missing. Spent a little time looking for it without much success. Continued to ride. Started to notice that cars would give me a wide berth and stay far away from me while i rode. Cars gave me about 8 ft of space when they overtook, some would even wait patiently at the back till I flagged them through. The town had installed LED signs warning cars and trucks to lookout for cyclists along the way. 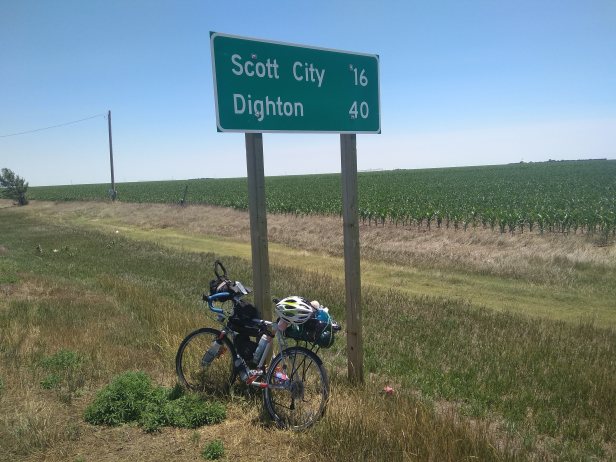 Finally reached the gas station in Scott city which had ice cream. A couple of slices of pizza and a little ice cream for lunch. Went looking for a family dollar to buy a pair of socks. Its been 30 days riding with mine and they had started to smell bad. A new pair of socks and a little grocery shopping and we were ready to go. As we headed out the winds had picked up. Seems like we will end up at Digiton for the night. The scenery here is quite different. Unlike Montana and Colorado its super flat here. Barely any trees and lots of wheat. Saw a few oil wells being dug. The same one s that you see in movies.We slowly rode into town. Seems like 30 miles is quite far when you battle headwinds the whole morning. As we were entering Digiton, Don ran into the sheriff. According to his map he would need to check with the Sheriff in order to camp in the city park. Rolled up to him just as Don finished his conversation. The Sheriff was super nice. He wanted to know what i thought about the US. Over a smoke we chatted for a bit. He wanted to know about my interaction with law enforcement. The media narrative of the law enforcement was super negative. They apparently targeted non white folks. My experience had been the exact opposite. The police had been helpful all the way till here.  He was telling about the reason police are usually on the edge. Since carrying a gun is legal and when a cop stops someone they have to be on high alert for any movement. Makes sense i guess. Asked him if he could lock up Don and I for the night incase they had space in the jail just to keep us warm and dry. He refused, maybe the jail was full. Rode into town to the gas station. A cup of coffee and a chat with a guy buying lottery got on my way. Met a farmer who was telling me about the season he haas had this year. Apparently they had hail storms and lost about 2000 acres of crop. Even though he has insurance it barely covers his costs. Also discovered that harvest season is between 10th to 20th June and people are always in a hurry at that time. they work 20 hour days just to get the job done.

Me and the Sheriff during a smoke break

Finally got to the city park. Don had setup for the night. The park was next to a shop selling fireworks. Quickly went to the shop to use the restroom. Came out and started to chat with the guys selling fireworks. Apparently they drive 30 miles each way to get here to sell fireworks. Seems like everyone in America is driving at least 60 mins to get to work. Told him about Diwali and invited him to town if he would like to see what happens during the festival. unlike back home here fireworks are used only on 4th of July. It was good to find out that lots of town has a firework show on the 4th night. Don and I made plans to get to Sterling, Kansas for the 4th July celebration. Don had been there during a ride a few years ago and had loved the town. The town was about 10 miles away form our route but they would have some sort of parade and a firework show for sure. I checked online and found the agenda. They had an ice cream eating contest, a barbecue, a concert and a fireworks display. Seems like a good plan to go to Sterling. We would need to ride a little harder to get there on time. The theory that we could make time in the plains hasn’t really worked for us. The winds have been super strong. Apparently we are in Tornado country and this is how the winds are during this time of the year. 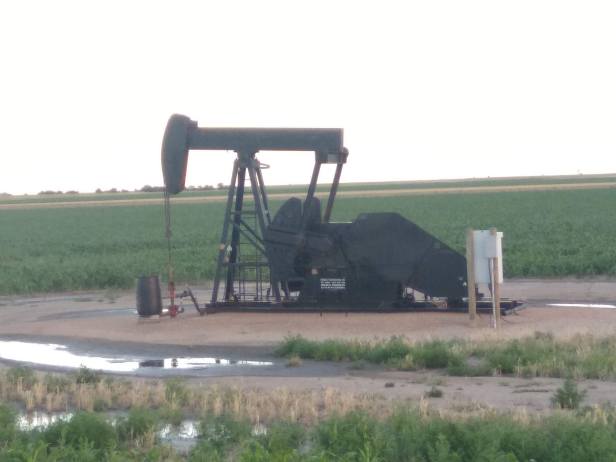 Finally got to bed for the night at the Gazebo in the park. Stuck close to the walls to keep warm. Kansas unlike the other parts of the country hasn’t had any churches opening doors for us. Maybe up ahead we should be able to find some churches.

Lesson for the day: Do not hide your hands when a cop stops you.

Up next: Day 31, Digiton to Rush centre.