Woke up under the overhang of the senior centre. Since the town’s store would open up only at 10 we ate under the overhang and got ready to leave. Its been a while since we have started without a cup of coffee.  i had checked the previous night and discovered that the next town to get supplies would be Larned. Rode to the store to check if the restrooms were open. Everything seemed to be locked up. Continued to ride towards Larned to get coffee. The priority was to get tot he town before the winds start. A few minutes later the winds started. This time it got stronger than ever before. Slowly slowly crawled ahead. At one point i just wanted to go back to sleep. Don was also super sleepy. i think the lack of coffee and last night’s bed hasn’t helped one bit to motivate us to ride harder to get to town.

This sign was for Cathy since she watches PnR

As we reached the junction towards Larned a coop showed up. One of the guys in the car i flagged down to check if there was a store close by had told me that the Coop gives out free coffee. Quickly rode towards the office building. Walked in and asked for the coffee pot. Finally a nice cup of coffee and some shade and we felt better. Ate some oat meal since both of us were super hungry. After a couple cups of coffee we were ready to go. Don had ridden this stretch before and had stopped at the Fort on the way in the past. He was telling me about it and now i wanted to check it out. We rode into the fort area and parked our bikes. As we parked 2 people were walking by who were surprised to see Don They were his pastor and her husband who were passing by who had stopped to see the fort. A quick chat with them and a couple of pictures later I went in to explore the place. Extremely well kept area around the entire fort. They had a visitor center and were putting up a film about the place for everyone to see. Spent a few minutes watching the film and then walked around looking at the fort. Nice to see history preserved.

Entrance to the Fort 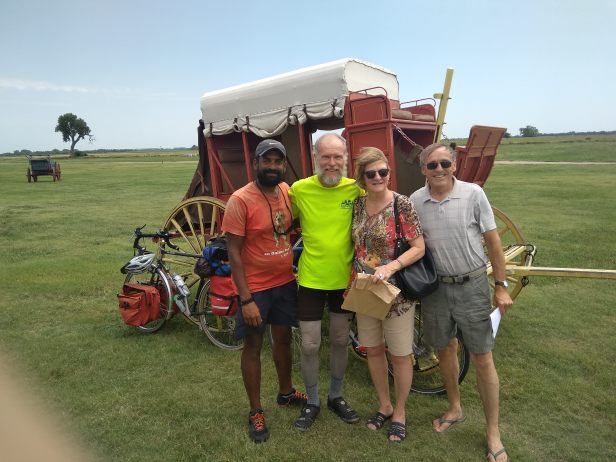 Friends of Don that we met at fort Larned

Finally we reached the town of Larned. Got a coke and a burger at the store and sat down to eat. We had to reach Sterling as soon as we could since the run was in the morning. Looked up on Warmshowers to see f we could find a host but there wasn’t anyone. Just happened to look on couch surfing and found a host. Wrote to him and quickly got a message saying we were welcome to stay. With accommodation sorted we headed out towards Sterling. The only stop between here and Sterling was a little town of Seeward about a mile off the route. It shows that there is a little restaurant in town which maybe open. Started our ride towards Seeward and the winds got stronger. Seems like the evenings are a bad time to ride. Reached the junction of the town and found the park. The park had not been maintained and seemed like a bad place to sleep at night. While Don went ahead to the church I went looking for the restaurant to get a cup of coffee. Sat outside with some coffee and chatted with the people around. Apparently this place is super famous since they serve good food. People come from about 30 miles just to eat. The staff at the place told me that they would be closed tomorrow so no coffee in the morning.

Generators that people used for welding

Went back to meet Don who was sitting outside the church. The church did not have a overhang and we would need to stay outside. The church like yesterday was locked up but had a tap outside for us to use. Don had asked the neighbor permission to sleep outside the church so that nobody would disturb us at night. Made our peace with the fact that we would need to sleep outside out in the open. Seems like Kansas will not give us a break just yet. With strong winds blowing we quickly put out our sleeping mats and went to bed. Thankfully we have a house to stay at tomorrow. I was looking forward to do the run but atleast we would get to town in time for the parade.

Our camping spot for the night

Lesson for the day : Coops’s serve free coffee, all you have to do is just ask.

Up next: Day 33. Seeward to Sterling