Woke up early in the morning hoping that a member of the church would come to open the fellowship hall and make us a cup of coffee. We heard that the nearest town was about 18 miles away. Waited around for a bit and then hit the road. Battling the winds slowly reached the town of Cassoday. It took us a few minutes to find the store. A cup of coffee and a sandwich we at outside relaxing in the shade. A couple of tourers riding from East to west pulled in. Started to chat with them and they told me about Kentucky. Warned me about the region from Seabre to Hazard. The town of Hazard is an actual hazard according to them. Well seems like LE and I have to be a little careful. After the conversation with them i sat down to finish a bunch of things pending including notes from the last couple of days. By the time we decided to hit the road it was 12 noon. Just as we were about to leave the Dutch couple rolled in. They had stopped at Newton yesterday and  stayed at the bike hostel. Chatted with them for a little bit and made plans to see them later.

Maybe i can race with this

Headed towards of town of Eureka. They town had been hid by a tornado a few days ago. I had run out of tobacco and needed to find a store that stocked some good tobacco. After a long ride towards the town we finally there. Quickly stopped at the smoke shop to get some tobacco. It was already about 4 in the afternoon. A quick stop at the grocery store and we headed out. Inspite of the tornado going through the town less than week ago everything was back to normal. Our plan was to get to Chalute for the night. We would need to ride through Toronto to get there. LE was hoping Toronto was as nice as back home. Don headed out first followed by LE and me. We had stopped at Sonic to ge ta cup of coffee before we got on the road. A couple of hours of riding and got to Toronto. The entire town seemed to be closed. Seemed like a ghost town. Got a drink from the vending machine and we were back on the road. Just as we were going to hit the road a couple of people visited us asking if were the ones riding up and down the main road from the afternoon. They looked super high. We quickly left and pedaled a while before we even slowed down.

Somewhere on the road

As we got on the highway leading to the town of Benedict, Don was nowhere in sight. Discovered later that he stopped at a campground after Toronto. By the time we got near the town of Benedict it was already 11 at night. Was looking for a place to sleep and LE sent me a text asking me to come to the post office. The town was tucked away from the highway.  Finally found my way in and rode in looking for the post office. A couple were sitting outside having a drink gave me directions. Finally reached the post office to discover it was super small and could only have 1 person sleep in at a time. The porch had a wooden floor and I setup for the night. LE already had a situation where a neighbor had come to peek into the post office to see what he was up to. 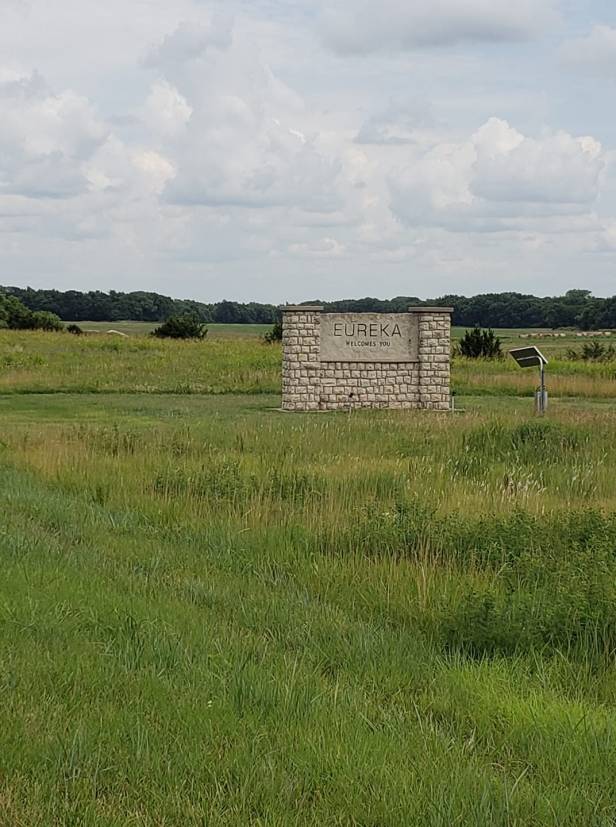 The town of Eureka

Finally the day was over. We had done a 100 miles and made a little time that we had lost. Texted Don saying I would wait for him at the gas station at Chalute. Hopefully the store in town would  open early in the morning for me to get a cup of coffee before i start. It was lovely riding at night since the winds were not as strong and sometimes we even got tail winds. The only downside was visibility was super low. I have not been able to see too much at night and hate riding post 9 pm.

Back at home everything seems to be ok. We had just bought a couch a day after i left from a friend. He had managed to keep it extremely well for 2 years and 20 mins after the couch came home one of the idiots puppies tore it. Cathy hasn’t been able to find out who among the 3 did it for now. Lets see if she finds out soon.

Lesson for the day: Toronto in Canada is colder than Toronto in the US.

Up Next: Day 36, Benedict to Girad