After a lovely night I woke up at 6 am to pack up my bags so that we could leave early. The hotel served a small breakfast so made some oat meal. at about 7 30 we were ready to go. After a quick picture of Don and Joyce we hit the road. For Don must have been hard to leave. He now would be able to see Joyce only after a month or so. LE met us outside the hotel. Our first stop would be the town of Summerville for lunch.The guy from the scout office would meet Don somewhere on the way and join us on the ride. The hills are here to stay so after a long, super hot ride we finally got to the town of Summersville. At the gas station we met with Aaro from the scout office. We chatted for a bit and learnt that he used to work with Lance Armstrong’s charity about 10 years ago. The hardest part of Lance coming out is how it has effected the charity. Apparently they were doing brilliant work with kids which now is suffering. After getting little to eat we got on the road.

Don and Joyce just before we headed out

As i kept riding I got the Ozarks National Scenic River way. Its nice to see that how nicely they have maintained the entire national park. A bunch of boats passed by. Its been a while since we had seen RV’s or boats been pulled behind cars. Seems like we are back in a holiday spot. Stopped for a coke at Alley Springs. Chatted with the people working there. Now is season for people to visit and fishing lots of people into the area. They also run a few kayaking trips which is also an added source of income. We went ahead to the town of Eminence. We started to stop at every town just to escape the heat for a little while. At the gas station we met Jimmy, a 19 year old Australian kid who is trying to break the record travelling across the world. Chatted with him for a little bit. Asked him about the Indian Pacific Wheel Race. Got some info about the Nallarbor and how to ride through it since truck stops were few and far.

After hiding out from the sun for a while we hit the road. Don went ahead. our plan was to stop at Ellington. We would decide there what to do next. Thankfully since yesterday was a rest day i was raging to go. I was hoping we would ride further. This part wasnt very hilly and quickly got to Ellington. We had done about 90 miles and still had a little daylight left. I went to the grocery store to get some coffee and little food. As I sat outside a puppy came running to see what i was eating. Fed the little fool and decided to go look for Don. The town had a biker hostel that the town’s people had setup. Rode to a restaurant and asked for directions. LE was there and he decided to come to the hostel too. Don was already at the hostel. Looked for it and finally found it after circling around the same building a couple of times.

Entering the town of Eminence

The hostel was brilliant. A small little room with an AC running on full blast and a shower for bikers. Jimmy had also stopped at the hostel for the night. Chatted with him for a little bit. LE wasn’t very happy that we were talking but we dint pay attention to him. After a quick shower and a little food i was ready to hit the bed. Don and I looked at the map and planned our next day. Don would meet his Brother at Farmington. I got invited to eat dinner with them. A reporter from the Farmington post wanted to chat with Don and I. Something nice to look forward too tomorrow. I had a couple of errands to run and staying at Farmington a little while could help getting them done. 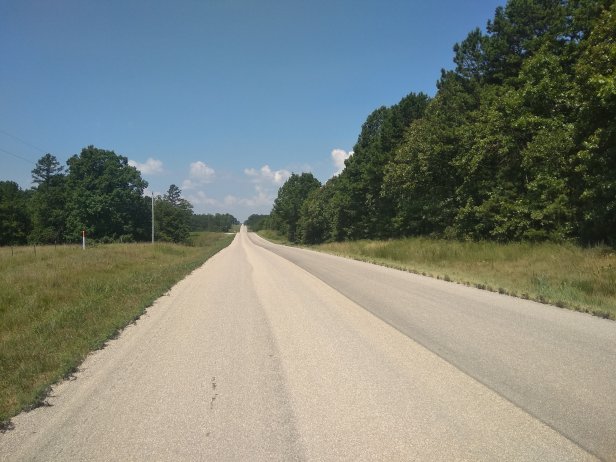 Getting to the town of Ellington

Woke up shivering in the middle of the night since it was super cold. Tried to find the switch for the AC and couldn’t find it. Tried increasing the temp and that dint work. Used everything i had to keep me warm but that still wasn’t enough. Maybe sending my sleeping bag back is a bad idea. LE seemed perfectly ok with the cold. Canadians seem to like it when its cold. Well looks like I am going to wake up early not because I have to but because its too cold to sleep in.

Our Bedroom at the hostel

Lesson of the day : Always find the AC remote and keep it on standby incase you need to turn it off at night else your ass will be cold.

Up Next: Day 42, Ellington to Farmington