Woke up at 5: 52 am in the morning and promptly went back to bed. At 6:30 had to get up since the post office would open in a few minutes. Just as i was packing up the post master stopped by. His only question was if it was comfortable sleeping in there. After a quick chat quickly left. They dint have coffee and i had already started to crave for some. A couple of miles down the road reached the gas station. At the cash counter was an Indian couple. That was surprising. In the middle of nowhere my people. A quick chat and found out they don’t have any Indian food, now that sucked. Quickly made breakfast and got a cup of coffee. After sitting outside in the sun for a bit i was almost ready to go. Still was a little hungry and debated if I should get something from the Gujarati guy or should i keep doing on. Finally decided to get him to make me a sandwich.  After the sandwich and another cup of coffee heading out. From what i had heard from Aaron there was a restaurant in the town of Sanora which was about 10 miles away. Slowly after a nice short hot ride reached the town of Sanora. A small town in the middle of nowhere. Sat outside the restaurant to have a smoke and then hit the road. Spoke to Don who had slept at the airport at Falls of Rough. He was getting ready to hit the road and would met me at Springfield. Both of us have a long ride ahead.

The day was getting super hot. Again soaked in sweat and stinky. Need to have a shower and rinse my clothes tonight. Got to the town of Howardstown and stopped by for a cup of coffee. Seems like towns are appearing at regular intervals and i wouldn’t have to carry a day’s worth of food anymore. As i passed by the towns of New Haven it was an endless row of houses and nothing else. Turns out they don’t have a store or anything close by. Continued to Bradstown which seemed to be larger and lots of stores. Stopped by at the McDonald’s for a bite to eat. Figured that I would not Harrodsburg for the night and most likely will reach a town called Mackville. Quickly checked to see if there was a store in town and found a small general store. Called them to check if they are still open. Turns out they are the only store in town and open at 5:30 in the morning. With that sorted I would need to find a place to stay which I could do when I get to town. 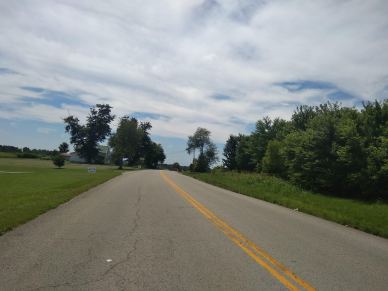 On the road somewhere

The ride from Bardstown to Mackville has been my favourite stretch so far. Winding roads passing by large farms and lots of horses all along the fence. The road was super small, single lane but had lots of grass on the sides just incase i got pushed off the road. Finally slowly rolled into the small town of Mackville. As luck would have it there was someone sitting outisde their house having a beer. Asked for directions to the church and they showed me the way to the 2 churches in town. The first church did not have an overhang so went on to the next. The Lady who lived a couple of houses next to the church showed me the pastors house. At 9:30 pm knocked on the pastors door. He immediately was willing to let me stay there. As he opened up the church we chatted for a bit. He wanted to say a prayer for me which seemed nice. Told him about Don and what he was doing to raise money for Enlance. He would have a look. Texted Don the location for him to stop by and drop a broacher when he got here. I think i was super stinky and the pastor gave me a bag of toiletries that they give out to all visiting cyclists. Iy had everything from a tooth paste to deo. He headed back home after giving me instructions on how to close the door in the morning. I was super lucky, he had just come back home an hour back from vacation. He was leaving again the next morning for another week on vacation. 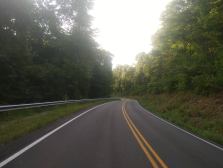 Scenes from the road

Now with a place to sleep sorted sat outside the church having a smoke when a couple of cars drove by. They turned around and came back. 4 people got off the car and walked up to me. They were the community watch / Volunteer fire fighters. Once they discovered I had gotten permission from the Pastor they seemed to ease up. One of them offered to get me some Coke and water. That was nice. After a quick chat and some coke they left. All of them were packing and super grateful that they dint pull it out while asking questions. 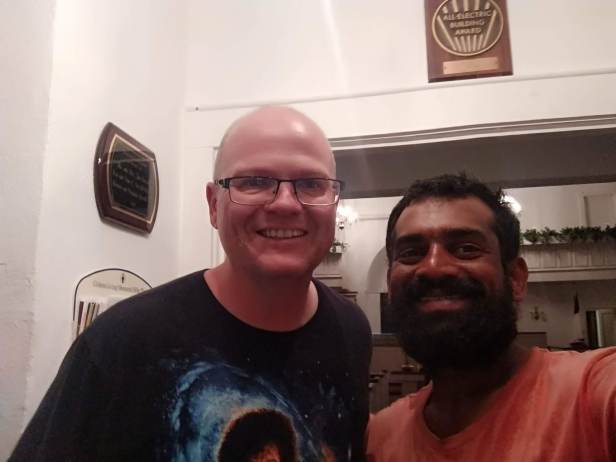 Finally got to bed. A nice church with an AC and lovely bathrooms for me to have  a sink bath. I had rinsed my clothes and hung it out on the church to dry. Maybe its time to get a new t-shirt, lets see tomorrow. Tomorrow’s my birthday and hopefully should get something wonderful for lunch. The last couple of days has been a little different. I have been riding with Don for over a month and now riding alone. This should be interesting.

My bedroom for the night

Lesson for the day: Sometimes sitting outside a church in a small town attracts lots of attention which leads to questioning which leads to a nice cold drink.

Up Next: Day 48, Mackville to Sandgap