Woke up at 6 in the morning and quickly packed up. The disadvantage of staying in a post office is that people start coming in at 6 in the morning. Usually a constant stream of people from then on till late night. My first stop was the gas station close by. This place was strange. The gas station was inside a box and with grills. Maybe they get robbed often and thats why it is protected. After a nice cup of coffee got on the road. My plan was to ride to Mckee to get breakfast. A nice peaceful ride to Mckee and rolled into the gas station a couple of hours later. A little homesick and the best cure for that seems to be buying junk food. At the store bought lots of food for about 28 dollars. nothing useful just absolute rubbish. Another cup of coffee and I was feeling much better and ready to hit the road.

Maybe this is London, England

My next stop was the town of Booneville. From here on out i would have to be careful of the dogs that everyone is talking about. Stopped at the gas station for a cup of coffee. The guys there asked me if I had pepper spray. Apparently lots of people get attached by dogs on this stretch. Back on the road a few minutes later and a watchful eye on  the side of the road. As i took the turn while climbing the hill 2 dogs charged. Yelled at them and they stopped. I have learnt to do that in the last few days. Back at home when i dogs misbehave i yell at them and they mostly keep quiet. This seems to be the trick to not get bitten. Slowly climbed to Buckhorn. A small town that i could get a cup of coffee at. Spent a little time hiding from the heat and napping at the gas station and hit the road. I somehow had to get past the town of Hazard and find a place to stay. Since i wasn’t going into town but was on a diversion Warm showers wasn’t an option. Decided to keep riding. looked like it would pour today. I was hoping the rain would hold till i got a place to stay for the night. 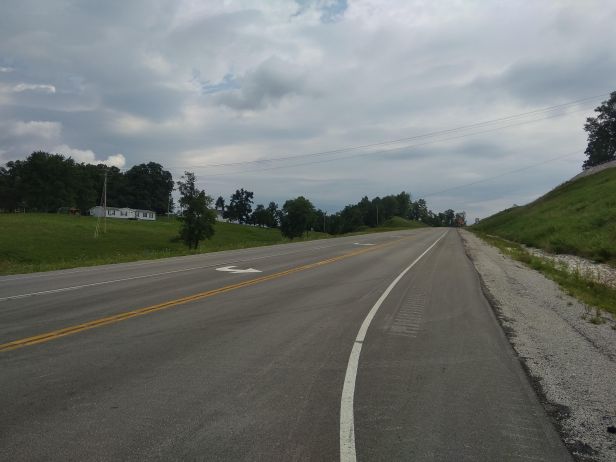 Lovely ride up a hill

At the junction to the turn off to Hazard it started to rain. Quickly kept riding. Figured that i wouldn’t have time to stop and get something to eat. Passed a McDonald’s etc and then went down a really steep hill. All the coal mining happens in this area. You could see the mines as you rode down the hill. Finally after a bunch of diversion as shown on my map reached a small little town of Dwarf. I noticed that they had a post office but saw a church ahead. Rode to the church and there was a gathering. Spoke to the pastor and his wife if i could stay in and they refused. Turnout churches can refuse people too. It started to pour heavily. Waited outside the church building for a little bit talking to one of the guys who had come to the gathering. He got me a little food and a soda to drink while i waited. Nice guy. Finally the rain started to let up. I had seen another church at the corner of the road with a nice porch. Quickly rode up, thankfully the porch was dry.

No clue where this is

Setup for the night outside the church under the porch. The church was on the corner of the road and a street lamp facing it was on. Seems like the post office with the light on the full night. Walked around the church to see if the door was open but everything was shut. No power outlets outside and no taps for water. This would have to do for tonight. Atleast this is dry for the moment. A few minutes later it started to rain. It rained quitte heavily for about 2 hours or so. Sometime in the middle of the night i woke up to turn over my plastic ground sheet that i was using as my blanket. Like the time i rode in Rajasthan i discovered that the inside of the sheet gets wet and they only way around it was to turn it around every few hours. Hopefully i will find a place to have a shower tomorrow.

Tomorrow i would enter Virginia. The final state in my trans am journey.

Lesson for the day: Every dog understands the word NO. Some of them are a little deaf so you would need to yell at them.