Woke up early in the morning to a super cold day. Figured i rather ride to the town of Fisty to the store now and not laze around in bed. Quickly packed up and on the road. The dedication i show to a cup of coffee if i had put 50% of that effort in the race i could have finished a month earlier. Got to the store and discovered that they only open at 8:30. Sat outside for a couple of minutes and the owner shows up. He opened up the store ahead of time for me. Got chatting with him for a bit and discovered that he was a lawyer who got bored and moved back home. He loved coming back home. Apparently this belt had lots of houses but people have started to move out after the coal mines shut down. He warned me about the dogs. Apparently this is the worst section across the entire route. Till i cross over Pippa pass i would need to stay vigilant. The people in the coal belt don’t like tying up their dogs and usually let them run around. Started riding to the town of Hindrance. I was trying to get to this town last night before the rain put a damper on my plans. Figured i could have brunch at Hindrance rather than trying to heat up a little food at the shop at Fisty.

Rolled into the town of Hindrance. Super nice little town in between the moutains. Stopped at the gas station to get something to eat but was told that there was a subway close by that served fresh food.As i was riding to subway met a tourer called Adam who was heading to Astoria too. We stopped at the Mexican restaurant to eat and gobbled up 2 large plates of rice and beans. By the time we hit the road it was already 12 in the afternoon. The plan was to ride to Haysis if the weather holds up. As we rode over the Pippa pass met with a velomobile rider called Alan. He was also heading towards Astoria. This is the year of the Velo’s. He has been on the road for about 2 months and has been watching the race for a while. Looked at his setup and asked him a bunch of questions. He intends to sell his velomobile at the finish for a price i cant afford. Now i want a Velomobile. After a quick break we started to climb the hill. Rode to the town of Bypro and stopped at the gas station. Got a little food and chilled for a little. Alan rolled in. He was super slow on the climbs but super quick on the plains and while coming down. Sat around chilling for a bit and we headed out. Alan intended to stop at Elkhorn city for the night and Adam and I planned to go further.

Our last stop for the day was at the town of Lookout. Calling it a town is a stretch. It was bunch of trailer houses in a row and a biker hostel in a church. As we chilled at the gas station drinking a cup of coffee a little dog came running to us. He seemed to want some love. Played with him for a little bit after which he went to sleep on adams lap. We have been chased by a few dogs today and I think this one wanted to make up for all of them. Seems to share the same trait that Pip shares back home. We got on the road towards Elkhorn city, i realized that i had run out of water and would need to fill up. At the subway at Elkhorn city filled up water. Since they dint have coffee I had to go next door. Got a cup of fresh coffee for free since they don’t accept cards. They were also super nice to give me a lighter since the one i had wasn’t working anymore.  Adam decided to sleep in the church at Elkhorn city and I headed out further. 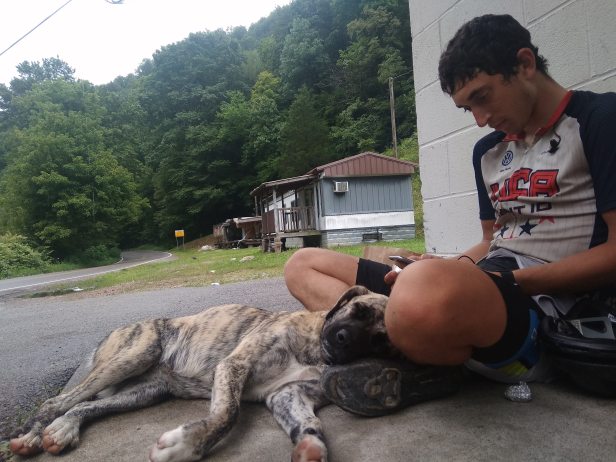 Adam and his friend chilling

Finally got to the border of Virginia. A couple of pictures and rode further. Finally on the 10th state. Time to finish this quickly. Found a church in Breaks just past the national park and stopped for the night. The church had a porch and it was dry in spite of the intermittent rains. Unfortunately I couldn’t find a tap or a power outlet to charge my phones but happy to be dry. Setup my sleeping gear for the night and just before i went to sleep 2 birds flew in and sat down next to me for a while. Either they had fallen down or just wanted to stay dry. Either way just let them be and went back to bed. Tomorrow i should get to Damascus.  Desperately need to have a shower , maybe will get  place to stay or at least a place to have a shower.

Bedroom for the night

Lesson for the day: Strange dogs sometimes will think your lap is a pillow

Up Next: Day 51, Breaks to Damascus